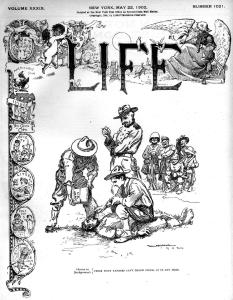 ‘Those pious Yankees can’t throw stones at us anymore.’

Ian Welsh gets it right again on torture. I posted about it here. There are extant photos of our US Army regular soldiers in the Philippines grinning while ‘water curing’ Moro insurgents.

Water cure was among the forms of torture used by American soldiers on Filipinos during the Philippine-American War. President Theodore Roosevelt privately assured a friend that the water cure was “an old Filipino method of mild torture. Nobody was seriously damaged whereas the Filipinos had inflicted incredible tortures on our people.” The president went further stating “Nevertheless, torture is not a thing that we can tolerate.” However, a report at the time noted its lethality; “a soldier who was with General Funston had stated that he helped to administer the water cure to one hundred and sixty natives, all but twenty-six of whom died”

The Ethics of Torture 101
by Ian Welsh
There are two arguments against torture.

The first is ethical: torture is evil and should not be engaged in. (This is, for the record, my personal view.)

The second is pragmatic: torture doesn’t work, or does more harm than good.

Ethical arguments are rarely conclusive: they must start from unprovable axioms. If someone disagrees with the axioms, it does not matter how tight the logic is, you cannot come to agreement. It is for this reason that some argue the need for a God—an ultimate authority who lays down axioms.

I am of the school which believes that there are certain things we should never do to other people. Death, to me, is not the worst thing that can happen to someone—go into a burn ward and ask the people with large body burns if they want to live or die, and understand that odds are you’d be no different.

Torture does horrible things not just to those who are tortured, but to those who torture. There is often a pleasure in hurting or humiliating other people. Those who pretend otherwise are deluding themselves, most likely because they don’t want to admit that such evil lurks in their psyche.

If you torture, you become a torturer. This is also why I do not laugh at rapists being raped: whoever did it is now a rapist too.

The counter-argument is simple enough: we do bad things all the time if we think the good outweighs the bad. If a few people’s suffering creates more good (for other people) than their suffering, we should allow it.

This is the dark side of utilitarianism: the greater good can lead to horrible actions. Yet our entire society is based around such compromises: from industrial agriculture, the use of plastic, widespread automobile adoption; CO2 emissions and pollution caused by activities we value more highly than the widespread harm they cause.

So why make torture different?

If you don’t make torture different: if you don’t red line it, then you are reduced to the pragmatic arguments: does it work, what is the ratio of good to harm, and so on.

The pragmatic ethical problem is “but if I don’t do it, others will.”

The pragmatic ethical response is “if I do do bad things there are more bad things in the world.”

If America doesn’t have prison rape and doesn’t torture, there is less torture (and a huge amount) less rape.

This is a unilateral action that the US (or any other country which tortures) can take to make the world and their country a better place.

At some point the world only becomes better when we say “no, I’m not going to do evil whether or not I perceive an advantage to it.”

Now a strong argument can be made that treating people better is an advantage, and there are many ways in which you can deny an advantage to those who are evil (generally by refusing to compete with them on their terms.) That’s another article, so I won’t go into it here.

But I will say the following: personally, I hold torture apologists in the same sort of contempt I hold rape apologists and those who make rape threats. Such people are worse than animals, and are a large part of why the world has so much suffering. Their arguments from pragmatics are vile and self-serving. The line must be drawn somewhere, but no matter where you draw the line, torture is over it. If you torture, or support torture, you’re evil.

That we have to have this discussion is amazing to me. Torture should be the sort of action which people are ashamed of. If they support it, if they’ve done it, they should be trying to conceal it, knowing all decent men and women will have nothing to do with them if their vileness is discovered.

That this is not the case is the saddest thing about American torture.