I’ve always hated Trump and everything he stands for. I channel surf right past his ugly mug and his game shows when I watch teevee. But now he is inescapable and omnipresent, like having a live chicken in your underwear. Please, you short-fingered vulgarian, die already. 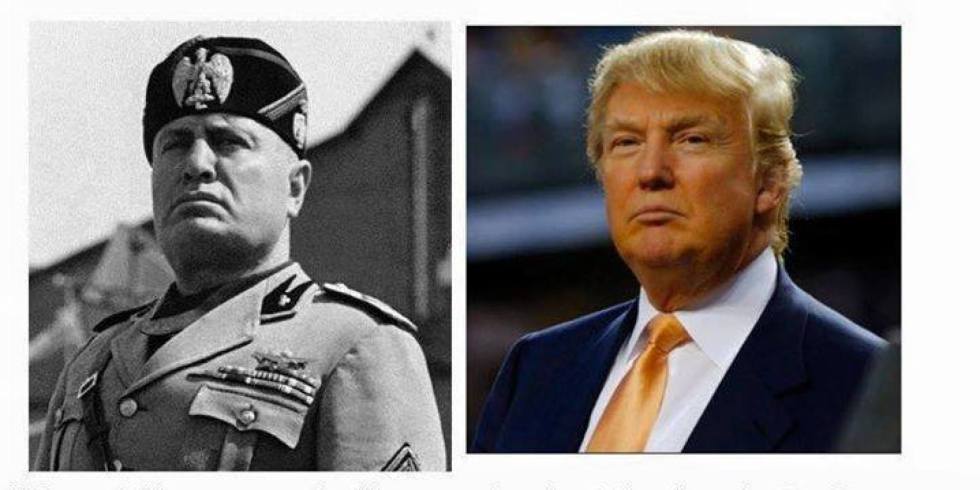 I’m not the first to notice how much Donald J. Trump sounds and looks like Benito Mussolini. The haughty imperious stance, glowering face and goon squads to back up his orders.

That slogan “Make America White Again”, and the 100% white mobs of supporters show who responds to Trump. People who like to be called losers by their , leader. Scared people who need authority to defend them against the brown people.

Donald is not constrained by political correctness like the rest of us. He can say the kind of racist, misogynist things we might long to say but can’t, because likely a woman or brown person would deck us if we did.

Trump loves to laugh at handicapped people too, though he’d not be so PC and just call them ‘cripples’. Trump likes gratuitous cruelty like throwing protesters out in the snow without coats because-why not, they’re losers.

Trump fans revel in this display of power, this toughness, the hatred they dare not show, especially against the weak and powerless. In the past they would have liked bear baiting or witch burning; today they have football, hockey, car racing, boxing, GTA, 1st person shooters and walking dead people to explode. And now Trump can speak for this silent majority.

Not that President Trump would be any different from Cruz or Rubio, all batshit crazy right-wing trogs, longing for the Middle Ages, and testicle cozies for the rich. None of them will be able to ‘work with Congress’ and neither will Mrs. Clinton or Bernie. The rich of this country like gridlock and nothing much will change. We learned that from the Obama administration.

At least Trump doesn’t claim voices in his ear tell him what to do like these other Republican God floggers. No thanks. In real life if someone claimed to hear voices that must be obeyed we’d carefully walk away nodding and smiling nervously.

Speaking as a former Democrat and now a Decline To State, this GOP slate looks weak and dangerous, none of them measure up to even John McCain. Trump has never been vetted regarding the Trump U. scandal and there are any number of other potential mine fields he has to cross. Plus he is an old man with very bad color who could easily die of apoplexy in one of his Twitter rages.

And his math (UK:maths-as the britophile WordPress spellcheck corrects me) doesn’t add up for a win with zero Hispanic or black votes. Trump is too polarized and hated to win the needed 70% of the white male vote; last election the GOP only got 63%, and that with a more plausible candidate and a larger relative percentage of white male voters.

Still, crazier things have happened and it’s a dark day for the Republic, etc. This is the kind of horse race campaign the media loves so sit back and enjoy.

From Balloon juice: Stormfront, the most prominent American white supremacist website, is upgrading its servers in part to cope with a Trump traffic spike.

A well reasoned plea from the rudepundit for Trump to commit suicide.

From welcome back to pottersville blogspot: Il Douche: The Most Dangerous Man in America