Per Wikipedia: “The M5 is the only U.S. bayonet without a barrel mount ring on the crossguard, making it look more like a fighting knife than a bayonet.”

My brother let me photograph his Korean Conflict {cough} M5 A1 bayonet for M1 Garand rifle circa perhaps 1956. Unfortunately no scabbard. Though pretty rare both are available on line for around $60USD. 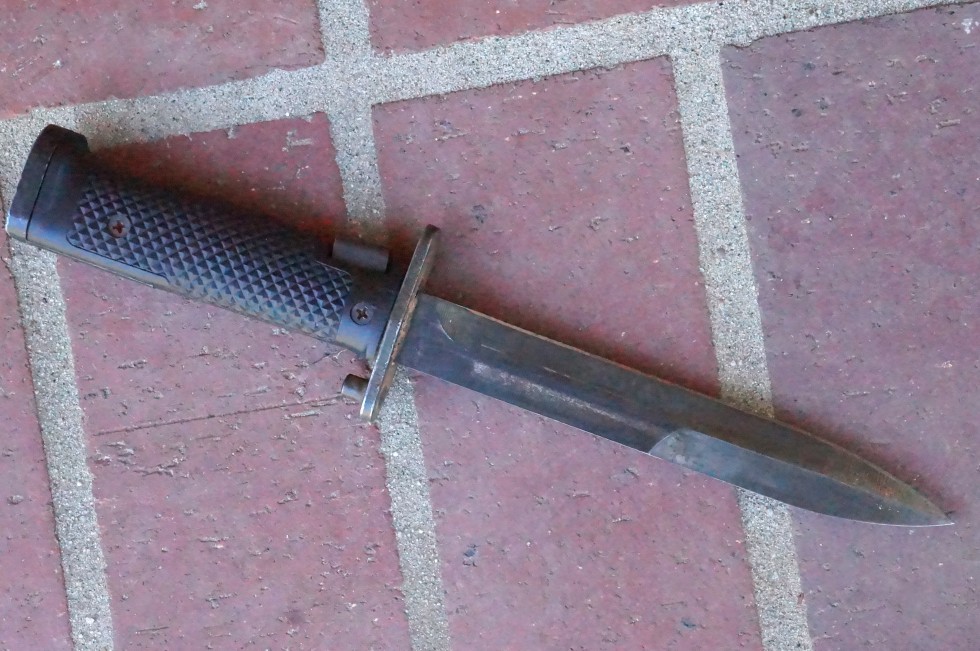 “During the Korean War, the M-1 bayonet and M-1905 bayonet, which both mount to the M-1 Garand rifle using the same mechanism, were found to be very difficult to remove from the rifle with gloves on.”  olive-drab.com

My camera could not focus close enough so the above pic shows the crossguard lettering of the model US M5 from olivedrab.com. On my brother’s bayonet the lettering reads: “US M5 A1”.

“In Kuhnhausen’s book the M5 and M5A1 are almost identical, with the differences being: (1) the grind of the cutting edge on the M5 goes straight all the way to the guard while the M5A1 curves to nothingness at the guard, and (2) on the M5 the spring that activates the lug release button is at right angles to the button and the tang, while on the M5A1 the tang is modified slightly with an angled surface so the spring is angled toward the point of the knife at about a 45 degree angle instead of at right angles. A third difference is the lug release piece. On the M5 it is a folded piece of sheet steel that when viewed from the front forms a U shape, while on the M5A1 though it is almost identical, there is a fold of metal to enclose the front of the button at the front of the button piece. Frank Burke”

“The M5 bayonet was adopted in 1953 as a replacement for the M1 bayonet. Some of the reasons given were its more compact size, lighter weight, use of less strategic material in manufacture, and ease of production. It shares the same general blade shape as the M4 and could use the M8A1 scabbard, which had proven reasonably satisfactory in service.”

Even though in the Army of 1956 bayonets were seldom used in anger, this Korean Conflict blade is a rare Cold Warrior-in more than one sense.

Unless noted, all text and images produced by todgermanica.com. Noncommercial use free with attribution.