You want your surgeon to have performed many total hip replacements and Dr. Soto and crew have done thousands, three or more per surgery day.

I liked his conscientiousness, enthusiasm  and fanatical anti-infection attitude. I had great confidence in his work.

Dr. Soto used the posterior approach, as taught by his medical school.

Dressing is soft, waterproof and staples don’t poke. Note bruising; it increased in the weeks following the surgery.

The OR crew seemed a jolly brutal bunch of bone cutters and I enjoyed entertaining them in the short time before the drugs kicked in.

Surgery operating rooms channel my mordant, absurd, manic Robin Williams character and I had to stop my monologue and pass out less the OR crew passed out laughing. Or so I remember it. Hope I didn’t start singing. 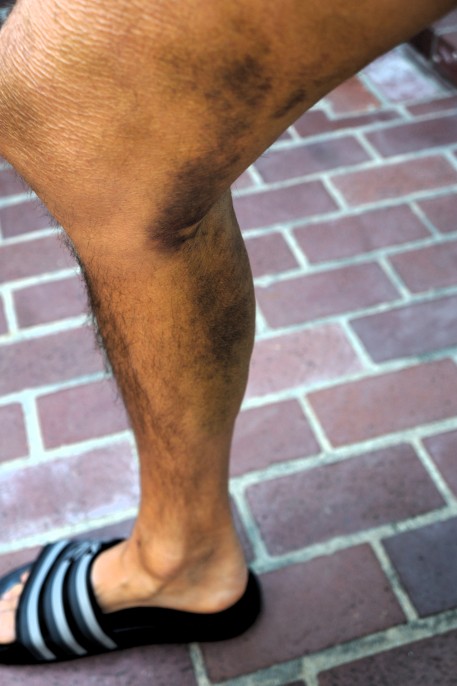 The bruising wanders around and changes color. Ice and PT help with aches, bruising, swelling.

My drug regimen: Flonase, Percocet, Dilaudid, Amlodipine, aspirin, stool softener. Not shown-anti nausea drug. I needed them all, plus prune juice and Metamucil about day five of no BM. But it all eventually worked, especially after I told the milkman, “No more cheese!” YMMV. Eat prunes, figs, dates-any good fiber. 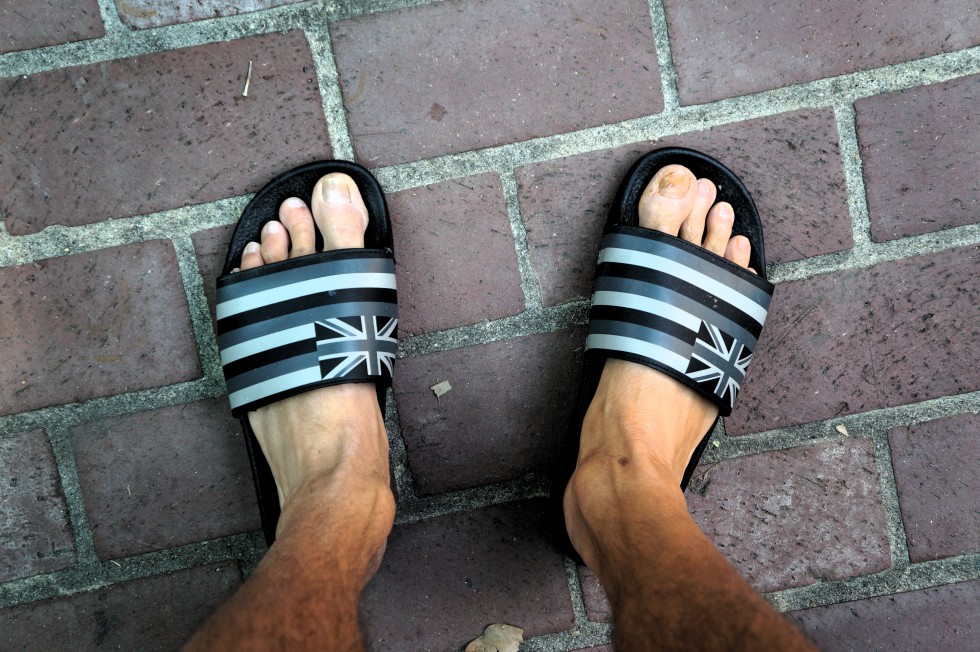 You’ll need slides, flip flops or slippers because you will not be touching your ‘bad’ foot for some time. The pink/orange goo on the bad foot is the remains of tenacious OR disinfectant because I had a cut on my terrible toe. 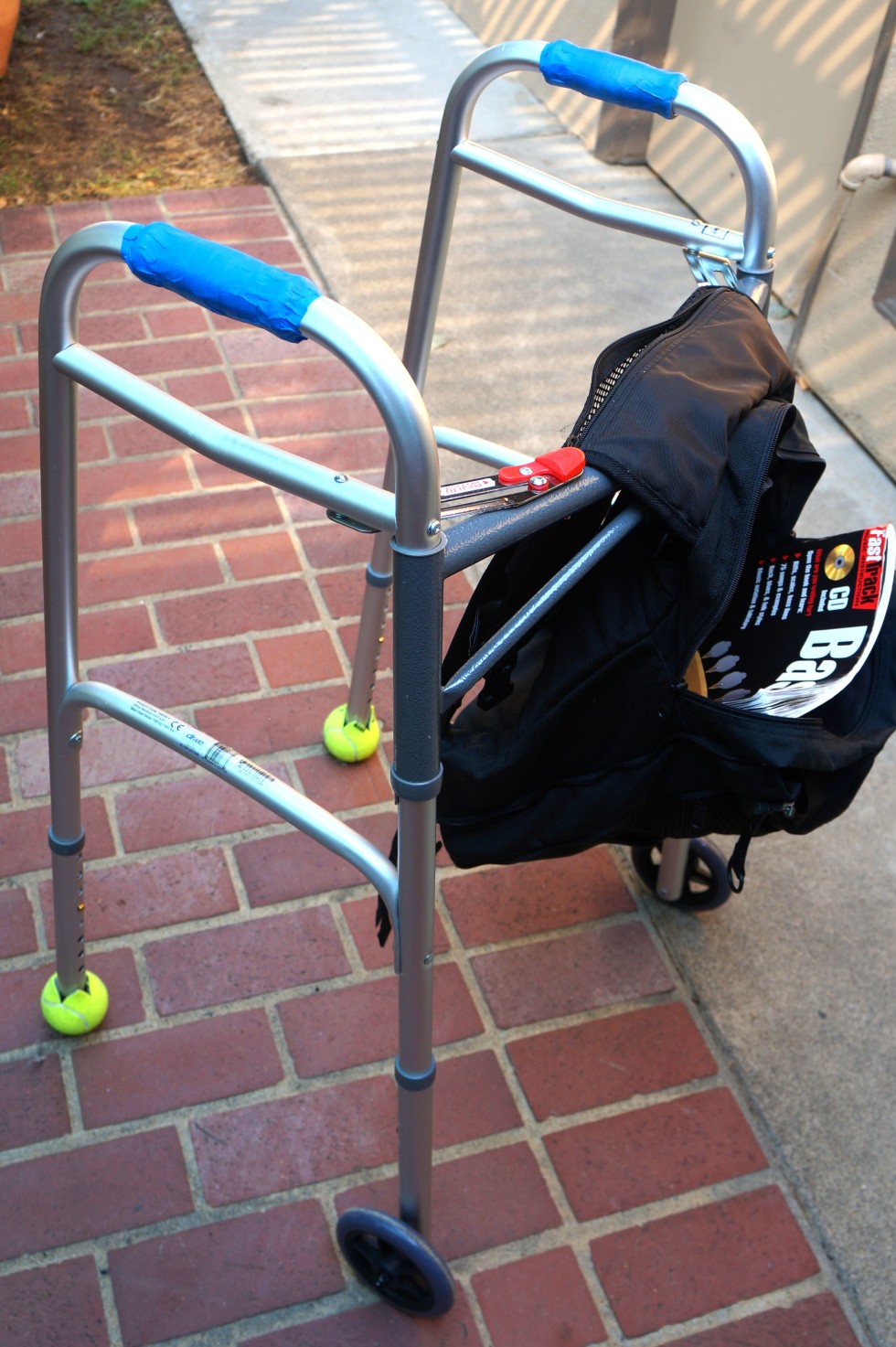 Hard to believe you have to supply your own dog toy tennis balls but it’s true, too hard without them. You’ll need to lash a bag to the walker, Kaiser supplied free for me, to hold your requisites. 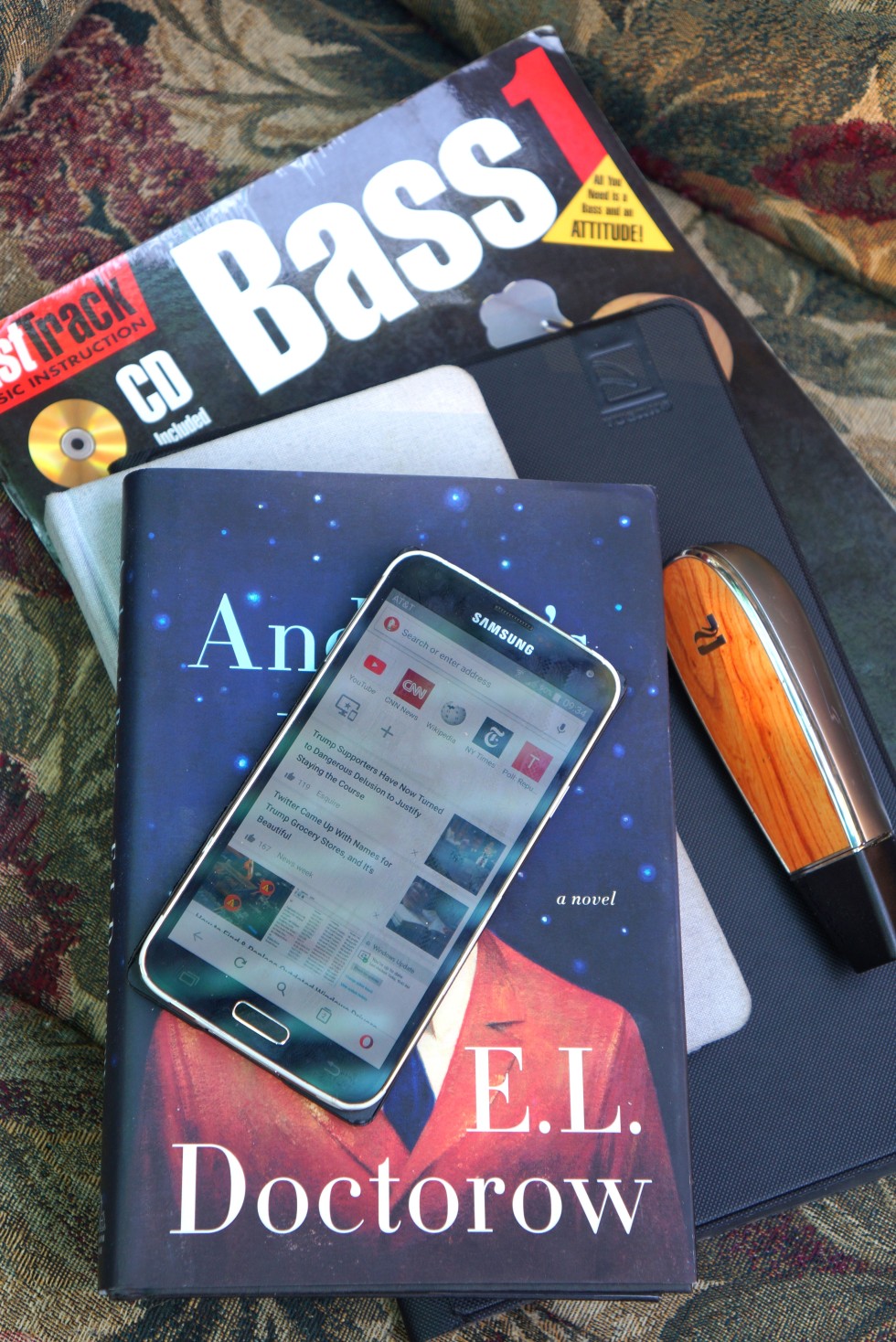 Nice to have reclining chairs and couches and beds available indoors and out. Fights the boredom. Walker memory aid: Up With the Good, Down With the Bad. Meaning lead with the good foot climbing stairs and with the bad foot descending them.

Kaiser provides a Physical Therapist for home visits to check on your condition and to show you movements to help your recover. Mine was named Tom Wheeler and he was as good as the rest of the hip crew. But it’s up to the patient to actually do the work every day. 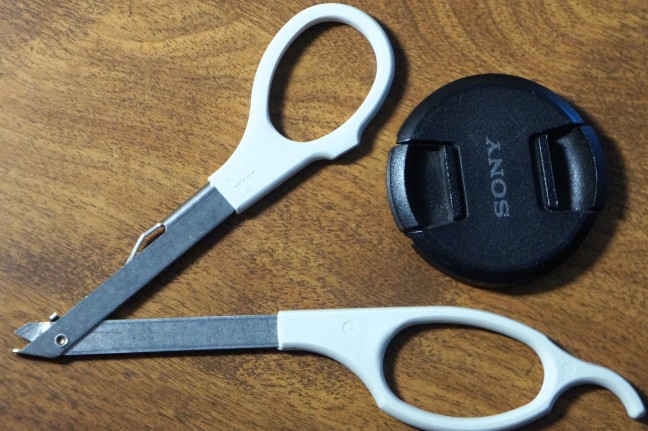 Here’s the staple remover Tom used on the incision Monday. Not much pain but I took the precaution of icing my cheek before he worked on my new vertical smile.

Tom does a lot of warning about forbidden movements like pigeon toeing, crossing legs or hip angles of less than 90 degrees. Hard to avoid but very necessary. Know how hard it is to crap partially standing?

Coming up on three weeks after surgery and I’m walking though still limping; I’m off narcotics; and I’m eating, drinking and eliminating normally. Tom warns me though that I’m really just starting and that soon the pain will recede and I’ll have to still avoid the forbidden movements for at least a month.

But just gimping around the house trying to develop a normal walk tells me the operation is successful. To not feel that particular grating bone ache when I stride out on my right foot is just amazing after more than five years of constriction and pain.

My muscles have atrophied and shrunk because stretching too far or any side to side movement brought agony. I feel that when my muscles are strong and limber I will have a nearly painless, nearly limp-less gait. I’m on my way.