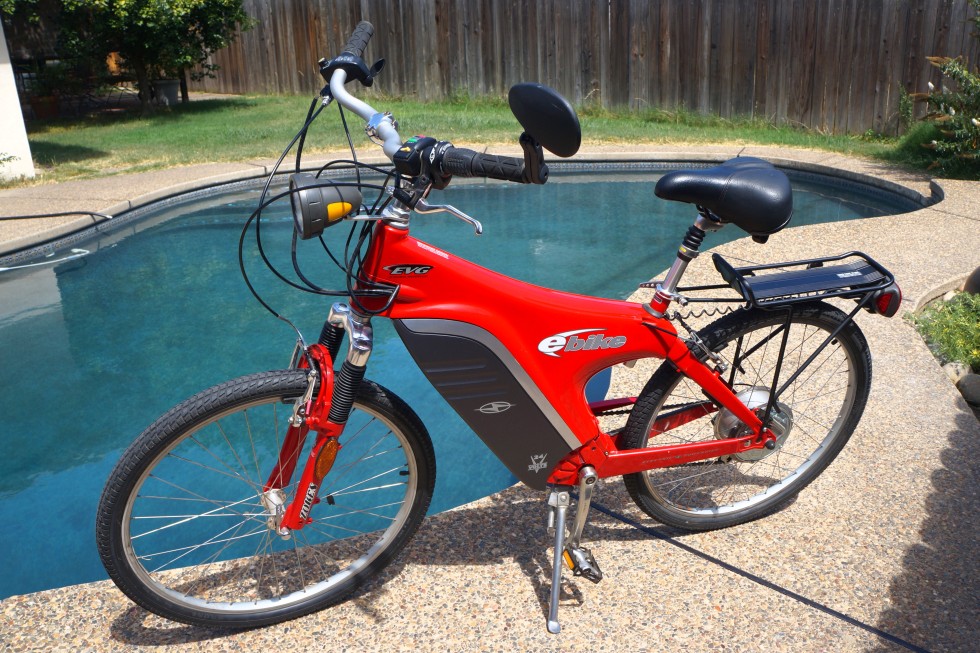 My neighbor Rick got this in trade and we’re selling it on Craigslist since neither one of us is an electric vehicle hobbyist or mechanic. Tasked by the government to reduce emissions, Lee Iacocca’s Chrysler sought the loophole of having US designed electric bicycles built in Taiwan and sold in Chrysler’s showrooms.

But since it’s missing the battery and battery box I can only test it with pedal power. While pedaling, it rides well, rolls smoothly, all seven gears shift crisply, and the brakes work well. The cushy suspension is very like a Chrysler Town and Country. But even without a battery it is a load and tough on any hill (weighs 70 lbs [31.752 kg] with battery and box!). 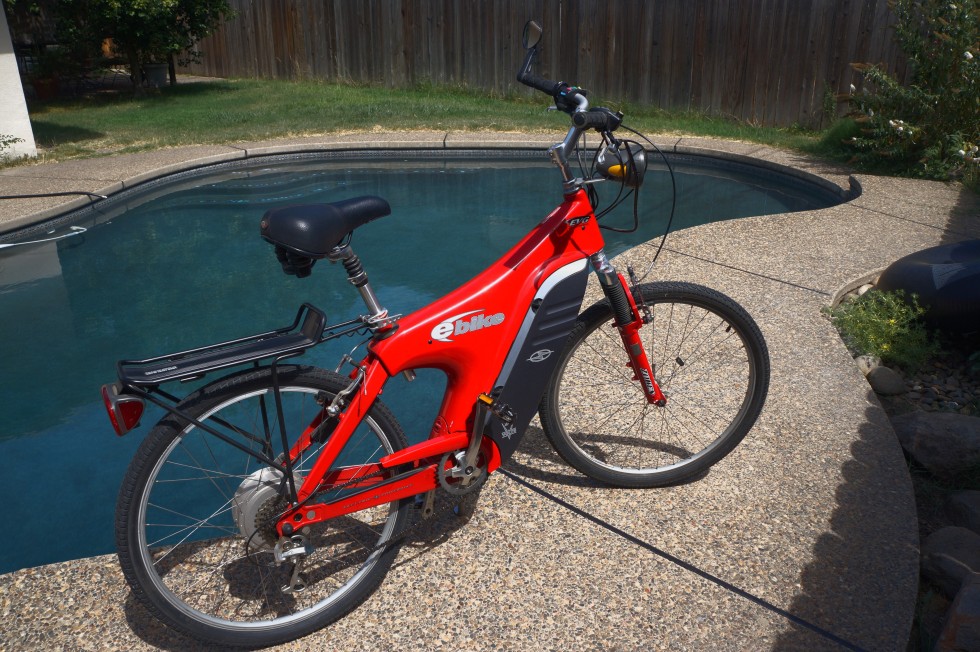 No longer made but parts and batteries are available online and in midtown Sacramento at http://theelectricbikeshop.org/. The bikes sold new from Chrysler for $1800 and the quality is obvious. Used by electric bike hackers as a basis for upgrades such as nicad (nickel-cadmium) or lipo (lithium polymer) batteries, changed gearing, beefed up controllers for higher voltage, etc.

Sports the fine German Heinzmann motor with straight-cut gears for strength-and for a loud whine when under load. Electric bike builders like the eBike as a basis for upgrades and go-fast hacks but prefer the 36 volt models because these guys have a need for speed that can’t be itched with the EVG’s measly 12 mph (19.312kph).

This bike was ridden little or never. It looks showroom fresh without a scratch on it. Tires, brakes, lights, rack-all are as brand new. We’d need to buy replacement 24 volt batteries and a battery box or else rig up our own upgrade with more modern batteries but neither Rick nor I knows squat about DC electricity so off to Craigslist it goes.

[15 July 2015- Here’s Mike Majors of The Electric Bike Shop in Sacramento with some background:

I thought I’d fill you in on the history of those bikes. By 1997 the EPA had issued a requirement to all the auto manufacturer’s in the US that they needed to produce a vehicle that was less polluting. So, for example, GM and Ford re-tooled and produced a car that would meet that requirement, Chrysler’s attorney’s, headed by Lee Iacoca, found a loop hole in the law in which they could import those bikes from China, sell them at the dealerships and satisfy the EPA’s requirement. However, Iococa was convinced that electric bikes were going to rule the world. So much so that after his stint with Chrysler he continued to import those bikes under the EV Global brand. Lee is right that electric bikes are going to help transform transportation in the urban environment he just got in to the game way too early.]

Unless otherwise noted, all text and images produced and copyrighted by todgermanica.com and noncommercial use with attribution is free.
Any advertisement you see on these pages is chosen, placed and monetized by WordPress. I am not consulted nor compensated.