Imported from the Czech Republic and touted as non-PVC and environmentally friendly, I bought it largely for the light 23 lbs (10.4 kg) weight.

No carry bag from Innova so I used a US Army surplus duffel bag. Complete kit, plus towel just in case, weighed 30 lbs (13 kg).

Assembly and inflation is not complex, consisting of sliding 4 cockpit brace tabs into slots, and inflating 3 tubes.

Yet it took me almost an hour because of poor translation from the Czech and unclear illustrations.

The push valves in particular are tricky on first use.

That said, with practice it should be swift to inflate because the  pump, though of painful ‘la mano del diablo’ shortness, took only a few score pumps to produce rigidity.

Sequence was (1st) the 2 side pockets and then (2nd) the single floor chamber air valve.

The valves and pump are very fast but the stooping is back-breaking, especially if your back is already half-broken.

Walking the light boat the 50 yards (meters) to water will be pretty easy once I am walking normally again.

Boarding it proved the hardest thing since I was loath to scratch the pretty new skeg on the hard rock by standing in the middle while grounded-but did anyway. 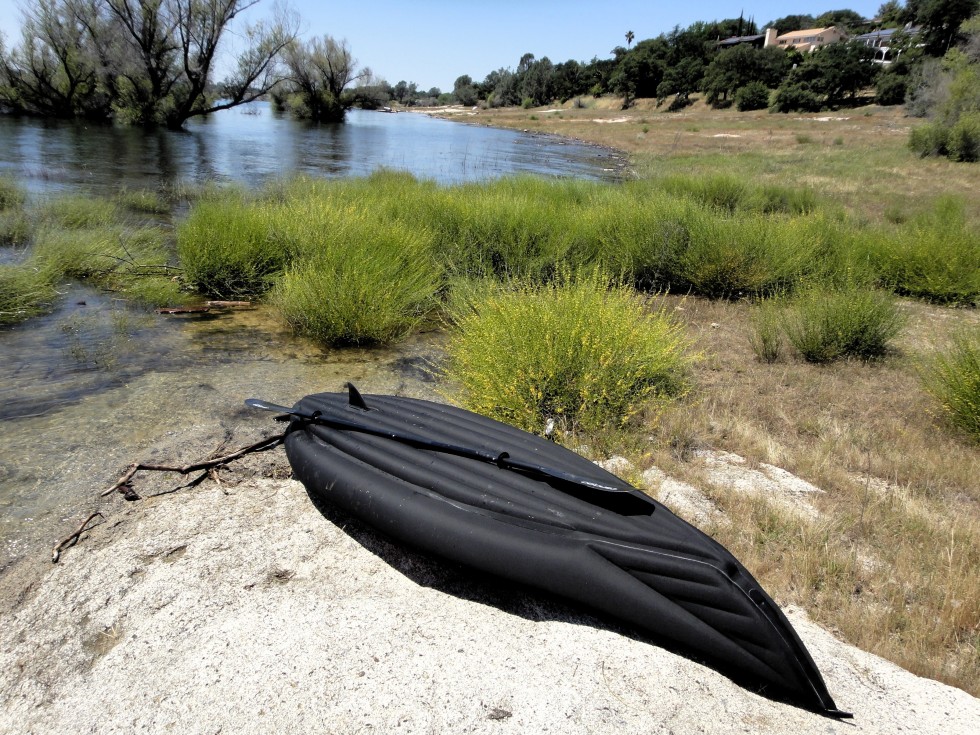 I compromised by folding one leg in and then manually hauling in the arthritic leg by hand while trying not to fall in the cold water.

The cockpit is small but not cramped for this 5′ 10″ guy with big feet once I finally got in and unstrapped my chunky Tevas.

Had A Problem Identifying Center of Paddle: Length Felt Right

The nylon foot rest needed adjustment and is not very effective but you’re wedged in and can get good leverage to paddle anyway.

Thankfully I could pull my knees up some space before they hit the curved metal brace for an alternate arthritic foot/leg/hip position.

The sling seat needed adjustment as well to keep my back off the rear brace.

But once dialed in it was comfortable and my butt felt fine on return-sort of like sitting on air.

All this squirming and maneuvering to just get in, adjust seat, adjust footrest, was only possible because the Swing 1 is very stable.

The jet-ski and power boat wakes were heavy, especially close to cliffs and rocks, reflecting in all directions.

Yet the Swing stayed right on top like a duck with no problems.

I found it easy to turn and to paddle albeit in that annoying zigzag way of all kayaks. Am I doing it wrong?

It feels sort of slow until you look at trees and bushes on shore moving pretty smartly to the rear.

It’s faster and easier than a canoe, but be sure you’re 100% good with zigzag progress.

The short coaming and metal braces keeps splashes out of the cockpit.

But unfortunately the front deck zipper will eventually leak cool water on  your legs.

To get a good stroke the wet blade must sweep right over your legs, dripping onto the front deck.

I threw my lunch knapsack back under the rear deck and it stayed quite dry. The bungee straps on deck front and rear are nice too.

The winds were calm so I couldn’t check the Swing’s performance in the winds.

I suspect it will blow around pretty well because of the light weight, shallow draft and high freeboard-like all inflatables. 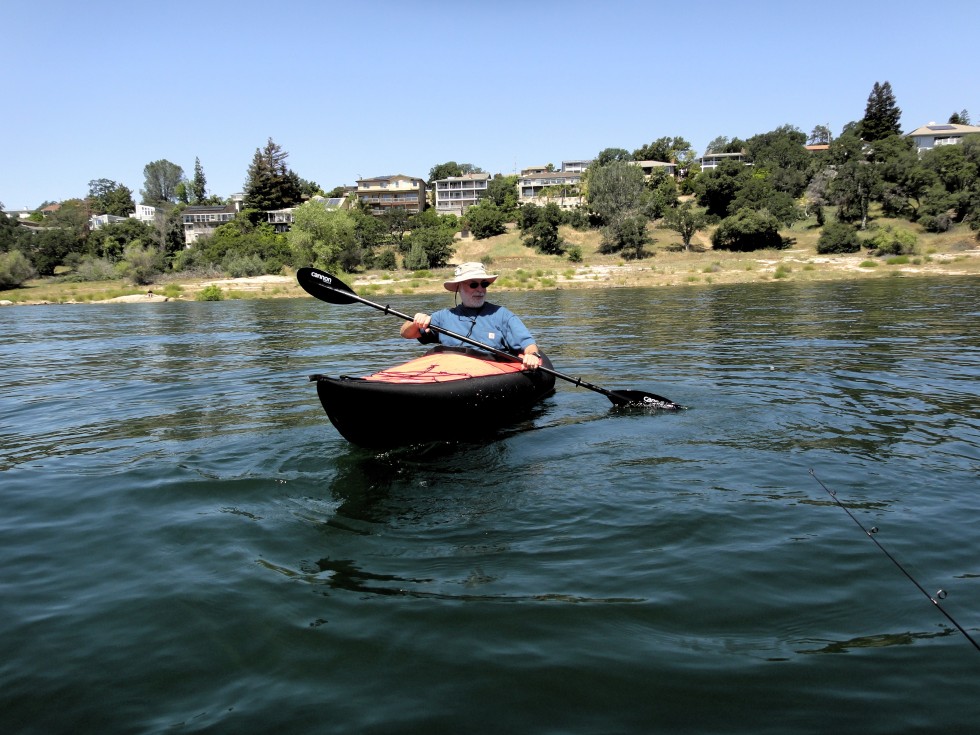 It turned sharply and propelled easily even with my crude paddling.

The manual says it’s rated for ww 2 conditions but with the big side sponsons it would be hard to capsize.

It could be done but you’d have to be inattentive.

It was great to see the lake at max capacity but the rangers had closed the prettier northern part of the lake for road repair.

So it was sort of like kayaking Coney Island. But I spent an hour and a half exploring the newly submerged trees and bushes.

When the turbidity clears I’ll see schools of bass swimming in the underwater brush. 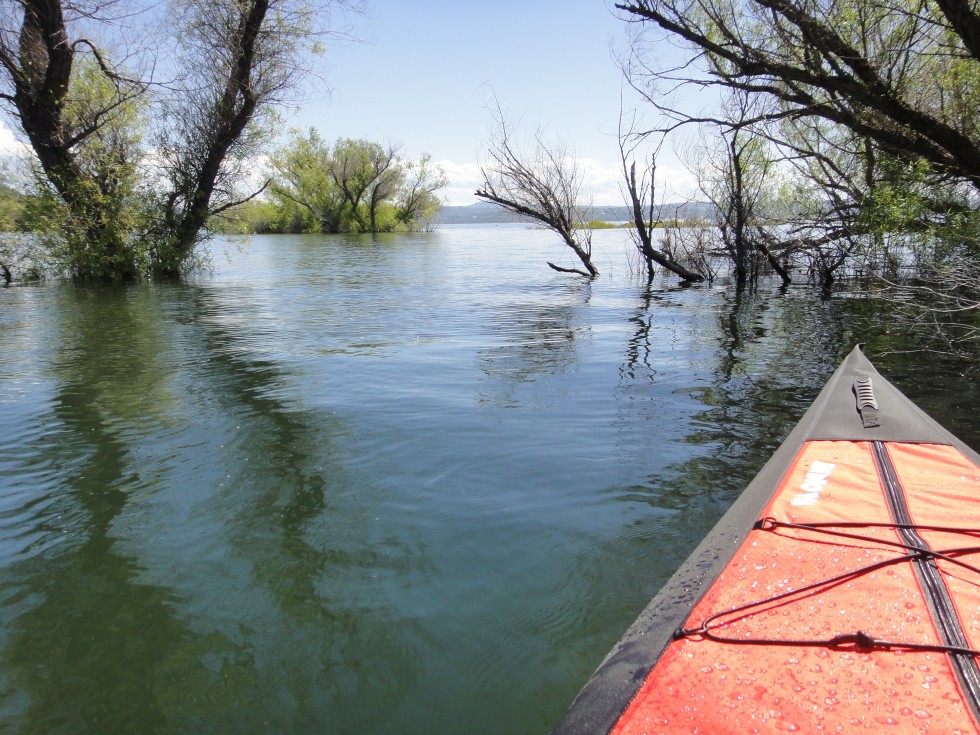 Clamoring out of the boat was again for me the hardest part, but you won’t be bothered if you’re halfway fit.

Folding it is simple after wiping it down, and the big pump sucks all the air out of each compartment in seconds.

Here’s the only casualty, some scratches on the skeg from the quartz-rich Folsom Lake granodiorite rocks. In future I’ll launch from deeper water.

My arms and shoulders were not tired because the Swing is easy to paddle.

Lightweight, nimble and tough, I plan to use the Innova Swing 1 on several local lakes and reservoirs in the Spring and Summer.