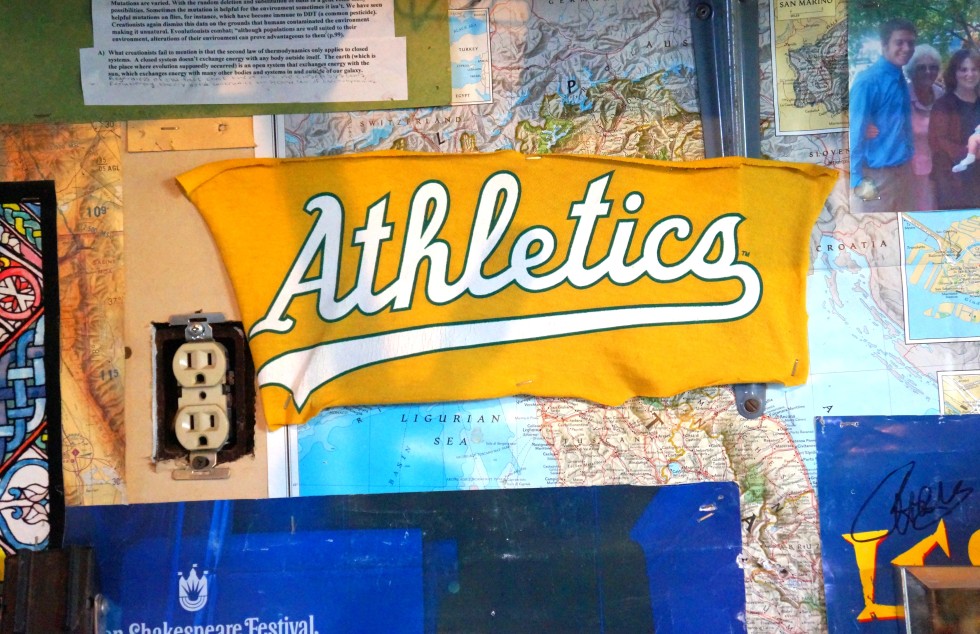 The Oakland Athletics, in the American League, are the perennial scrappy ‘small market’ losers of the Western Division, foils for better funded teams like the Rangers, Tigers, Houston…well, everybody.

The numbskull team owners shit on their enthusiastic, too-plebeian fans and scheme to skulk the team out of grimy industrial Oakland to the greener, high-tech, carriage-trade suburbs.

Probably spending any money made from baseball operations on lobby lawyers, the A’s usually have a fire sale of any valuable players about this time of year come the trade deadline; it’s kind of fun to see your team’s guy suddenly wearing another team’s colors in a playoff game, you go boy. But not that much fun.

So goodbye pie-in-the-face Josh Reddick, ace right fielder and general dugout goof, on a tear with the bat lately in the Athletics’ improbable winning streak. We hardly saw the best of you but best of luck with the Cubs, Giants, Royals…or, well, basically any team with a winning record.

And farewell Rich Hill, ace starting pitcher with that slight finger blister problem, can’t wait to see you wearing Dodger blue…and take that pricy Billy Butler with you, too slow on the basepaths.

Woe to be the fan of a quasi-AAA development squad instead of a once champion franchise. Oh, well. Just wait until next year.

Unless noted, text/images by todgermanica, noncommercial use free with attribution. Ad clicks pay only WordPress.

One thought on “Reddick We Hardly Knew You”