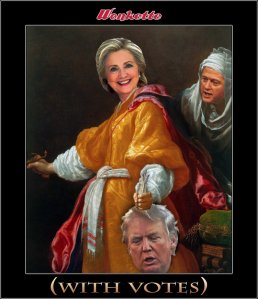 Judith and Head of Holofernes via Wonkette

Everybody knows Donald J. Trump, even if you never saw his cheesy TV shows you still know him. He’s that 3-card monte (UK: Find the Lady) dealer on Times Square that loves the poorly educated.

He’s that greased up connected guy that knows somebody who knows somebody can get anything done, badda bing. That’s his casino. How do you have bankruptcies when you own casinos? Trouble in the Counting Room?

Some say mobbed up, some say Russians. The Don says he’s great friends with Russians/never talked to a Russian in his life. And says he was being ‘sarcastic’ both times.

But the Don likes tough, lives tough, unbelievably hard is he going to be on ISIS, which is like totally attacking our titties, the day he takes office.

Oh, not tough like his butt-hole buddy Putin with the muscles, and the hunting and the horseback riding wearing those butt-less leather chaps across the mighty Volga- though the Don beats him on tan.

But you know, tough enough to order Muslims killed and their families and their wedding parties and their camels. That kind of tough.

And the Don’s bodyguard/goons are as good in a brawl as any Black or Brown Shirt from back in the 1930s: with Tazers! Comes with experience.

Now that Clinton’s poll numbers are higher the election is being rigged by ‘Crooked Hillary’ (love those cute nicknames-charmingly like George W. Bush-remember him constantly calling that one war criminal ‘turd blossom’?)

The Don’s solution? Execute her! Exercise your 2nd amendment right to vote with your M-16 semi-auto rifle with 20-rnd mag and flash hider- though during the primary in Cleveland they favored hanging her. How quickly fashions change.

I wrote the section below as a comment on anna’s website which has some nice pics and I wish I spoke Swedish. This is about all I can tell you about how Trump stole the hearts of millions of registered voters. Please vote in November because Trump’s minions will. 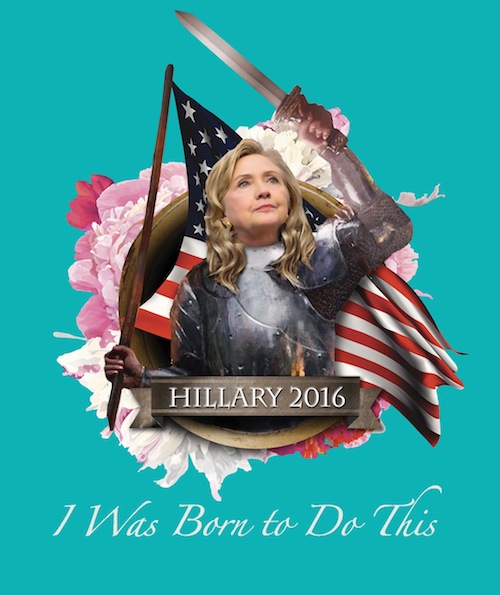 Thanks for following my blog.
To explain Trump and his followers (about 40% of Americans!) think racist white male backlash from a successful African-American president.

Also think how foolish that Republicans forgot to do their part in governing and dedicated themselves to vilifying, demonizing, and just obstructing governance through name calling and insult and agitprop- Obama is foreign-born; he’s a Muslim; he founded ISIS.

The Democrats-especially Mrs. Clinton’s wing of the party- don’t help the working poor much because she really is corporate-friendly and financially beholding to Wall Street; see her stand on NAFTA, TPP and other such corporate/governmental Anschluss. She is ‘normally’ corrupt in the US fashion in that she must spend most her time fund-raising to the 1% in order to win.

This is unlike Trump/Manafort/Pence who would appear to be out and out traitors being run and financed by Moscow. If you follow the money you have to think it; Donald’s missing tax returns; blood money from Russia for Manafort in Ukraine; Russian state hacking of the DNC; Trumps constant use of Russian memes and talking points; his deeply serious and abiding bromance and true love for all dictators but for Putin in particular.

Of course I’m voting for Hillary since Bernie lost the primary. Sorry Bern, big money is, sadly, how elections are won in the USA. And she does not appear insane like Trump does.

I hope for my country’s sake (and the world’s) that the cowardly, nativist, racist portion of the populace remains at only (!) ~40% so this buffoon flames out worse than Berry Goldwater.

Hope this helps explain things.
Just remember how racist and scared and authoritarian most Republicans are because terror!-think of the children!-scary brown people! Make America White Again, as trump’s hats always subliminally remind us.

And thanks to corrupt teevee news, toxic web sites, education cuts, religion and anti-intellectualism, the stupid runs deep in the USA. Thanks a lot Fox ‘News’.
Cheers

Unless noted, all text/images produced by todgermanica.com: noncommercial use free with attribution. Ad clicks pay only WordPress.