Part One showed me dismantling this Stakmore folding chair enough to remove and clean the seat cover and polish the wood. Now we will brace it up, shine it up and then re-mantle this 2012 classic (why is that not a word?). 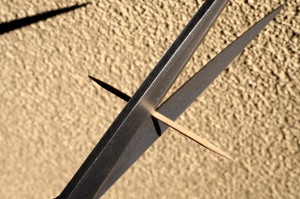 Cut toothpicks in half, drop glue into hole then tap toothpicks in till they break, then tap in more toothpicks, trying to break them off flush. You want it jammed with broken toothpick ends and even with the surface.

Add a drop more glue if you’re a belt-and-suspenders guy (gal), then let it dry.

I start the hole to put the screws back in with a sharp punch and then drill a small pilot hole.

After gently tightening the 2 screws back in, do what Stakmore recommends and tighten all chair screws- just not too tight. 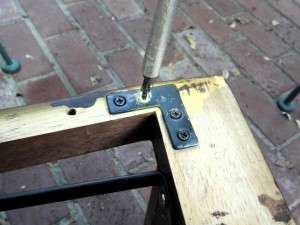 Did all my cleaning make the cover stain-free and bright again? No, all my work added was wrinkles and lint to the cover, and I had to cut off unraveling edges with pinking shears.

Also:
I used far too many staples
Installed the seat-bottom cover and top cover out of sequence and off-center
Installed the seat to the chair frame off center
Spilled furniture wax on the cover while taking pics with one hand
Failed to take a pic before I lit into demolition like guttin’ a bear– I wonder where these were supposed to go? Seems to work OK without them.

Theory is to reassemble in reverse order-which I almost got right. My cloth edge folds looked  bunchy and awful too but only from underneath. Why I didn’t wax the wood when the seat was removed is a good question but no harm, no foul.

I didn’t want to buy color-matching polish or wax for the chair so I used Goddard’s wax which I already had.

It helped the shine and didn’t stain when I spilled it on the cover, next pic. 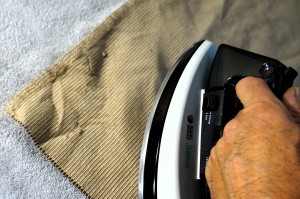 But Murphy’s Law does not always obtain. Flipping the cover material over, ironing it and lint rolling it showed a surface close to new. The Old English wax did not stain it and nobody will see my clumsy upholstery work because it looks fine from the top.

Here’s how it folds. 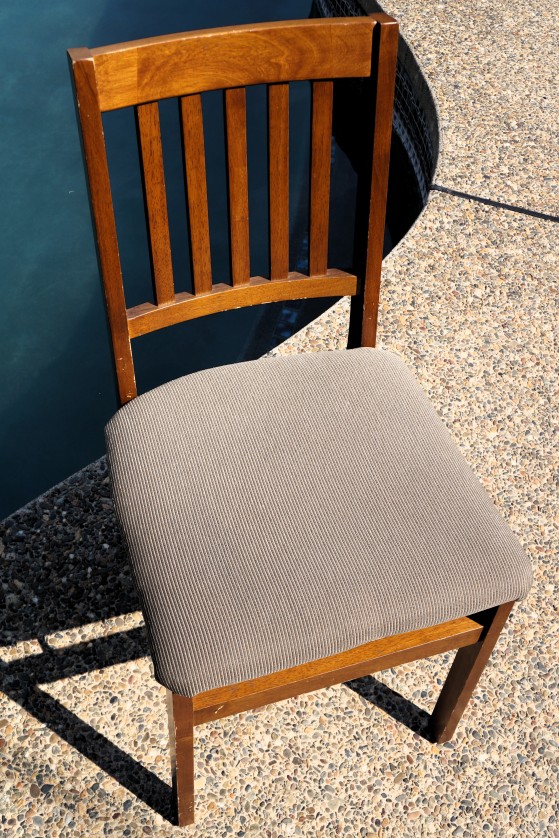 Here it is in fully upright and stowed position.

Here’s how Stakmore says to fold it.

Unless noted, all text/images produced by todgermanica.com: noncommercial use free with attribution. Ad clicks pay only WordPress.