We came close to flooding twice this winter in Roseville. Since the city spent $20 million improving the drainage of hilariously misnamed Dry Creek, everyone says floods are much less likely.

But our house flooded in 1986 before we lived here; and again in 1995 when we did. Once you see your house invaded by muddy water you become a believer. 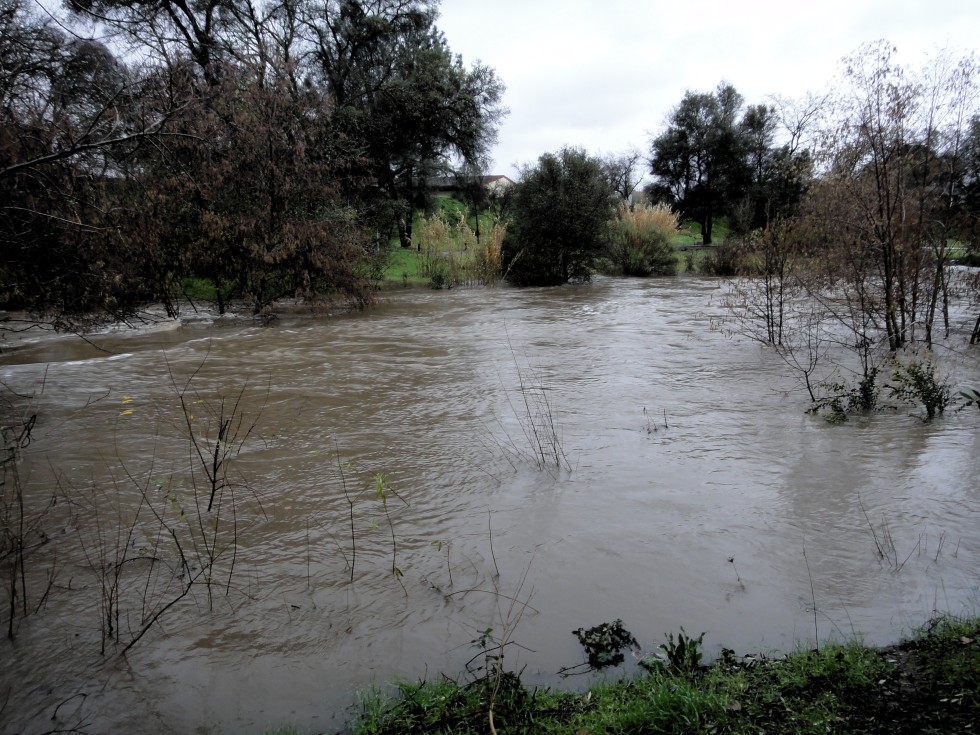 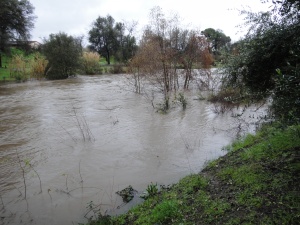 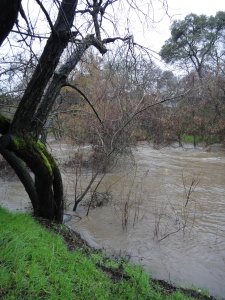 Here’s the view about 50 yards (meters) from the house during all the rains. Normally you can’t see the water surface from the front window. It looked like the Colorado during the rains with logs, trees, debris rushing through the new rapids. 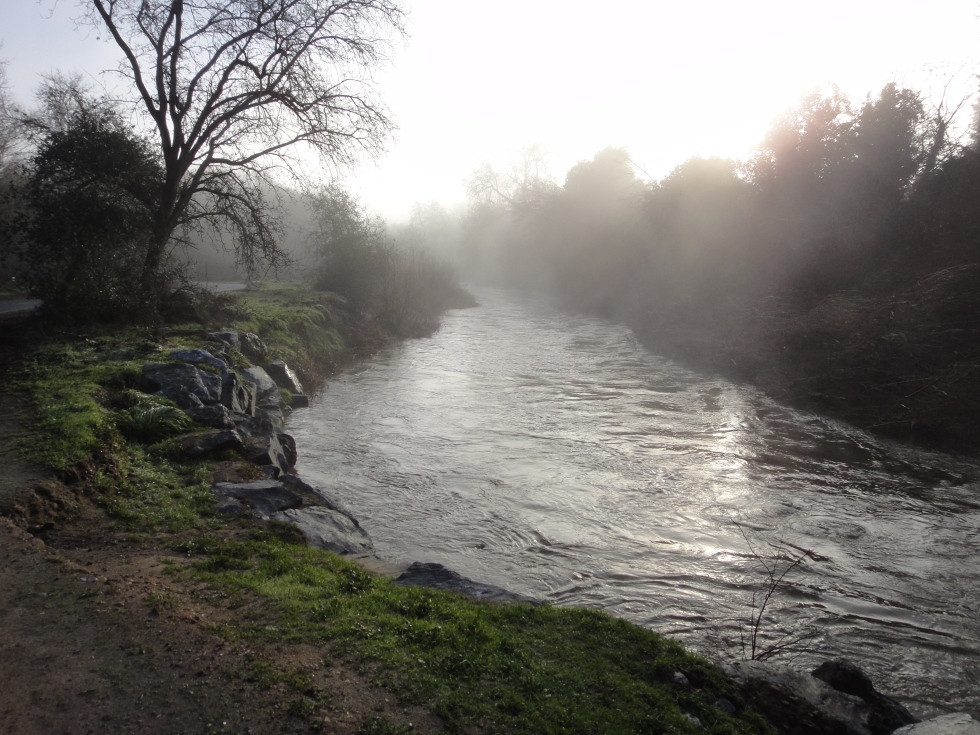 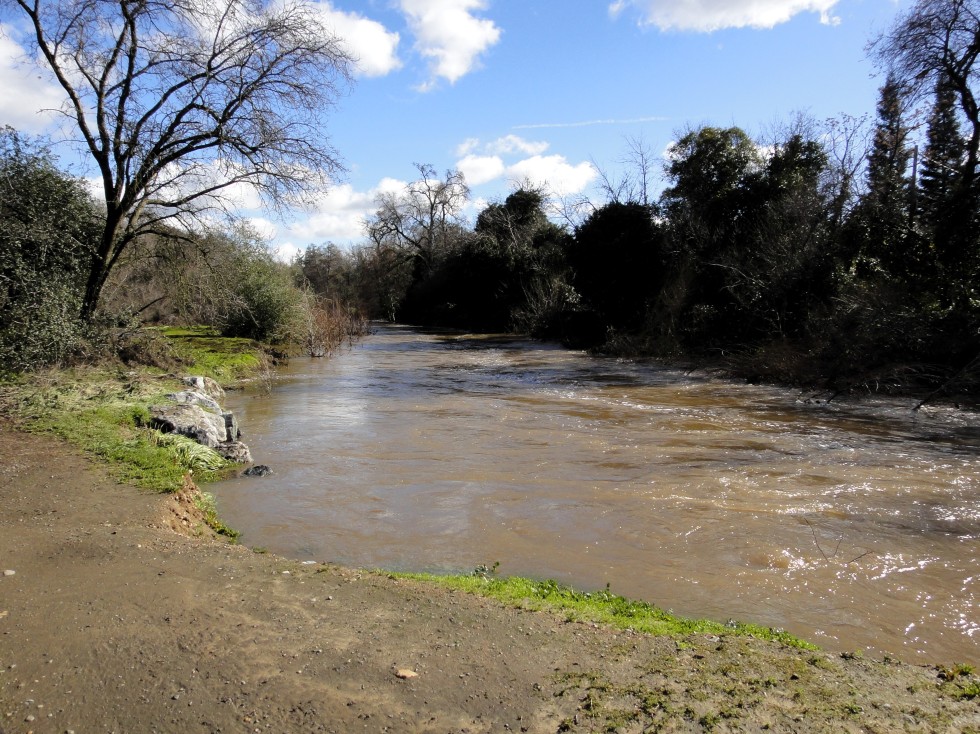 This is the ole fishin’ hole the day after the biggest rains. Above it is the normal high water level. During the previous five years of drought (trump’s ideas notwithstanding) the level was perhaps three feet here (1 meter) on average. 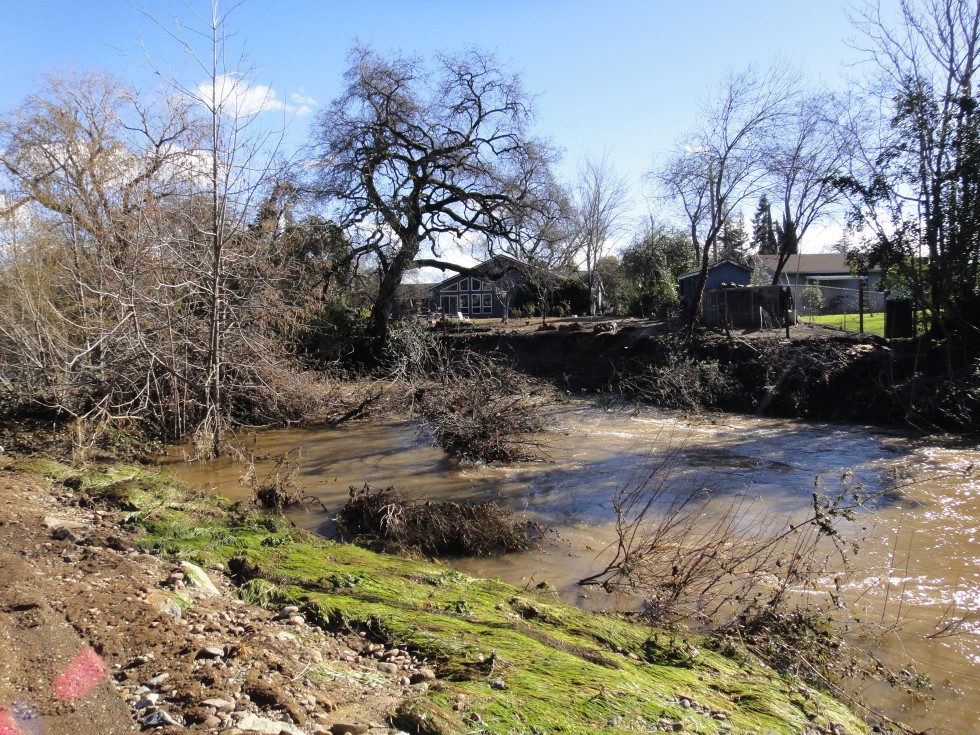 The water tore down this large oak in the process of taking out a chunk of the owner’s land measuring perhaps 20×10 meters (yards). Note the mud on the bike trail at left after the water receded. 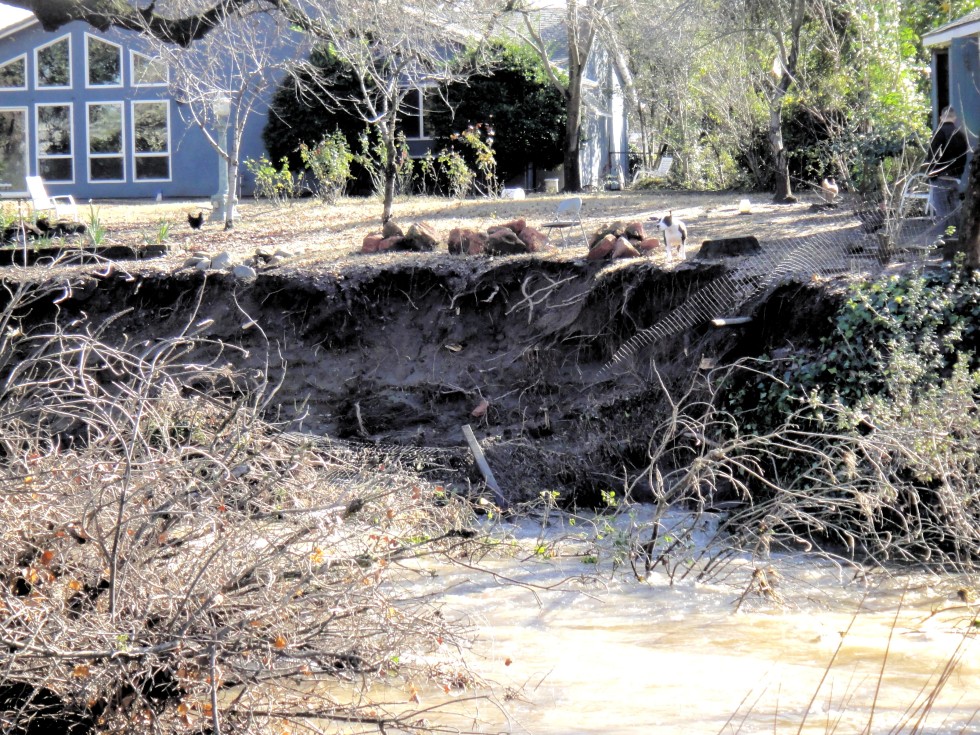 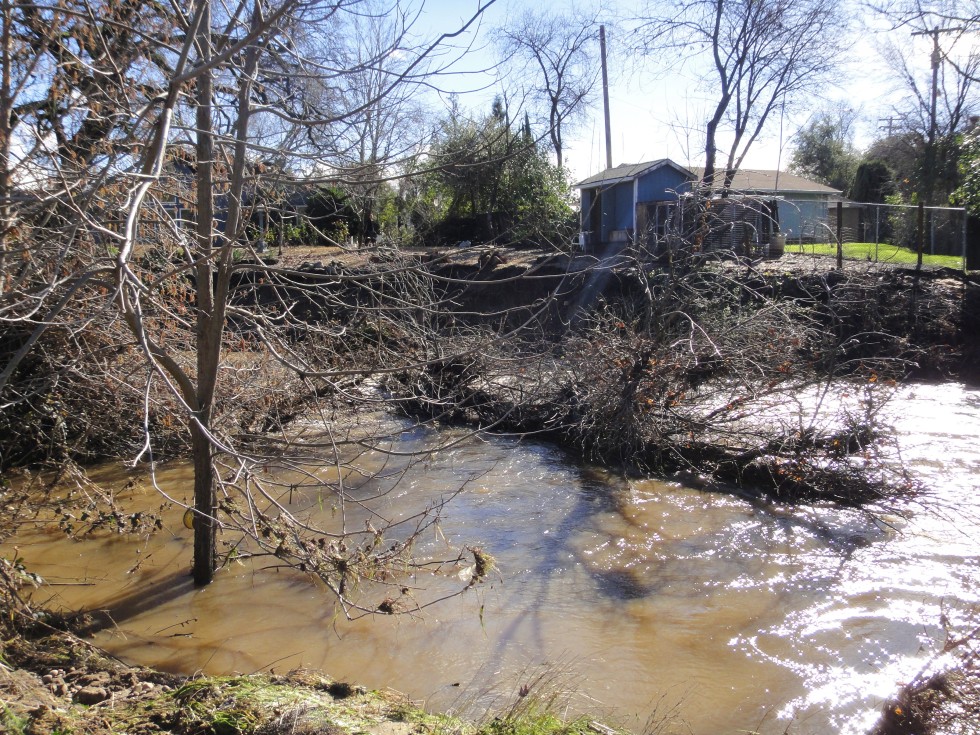 The chickens, their house and the dog survived but not the fence. The rest of it was swept away the next day. 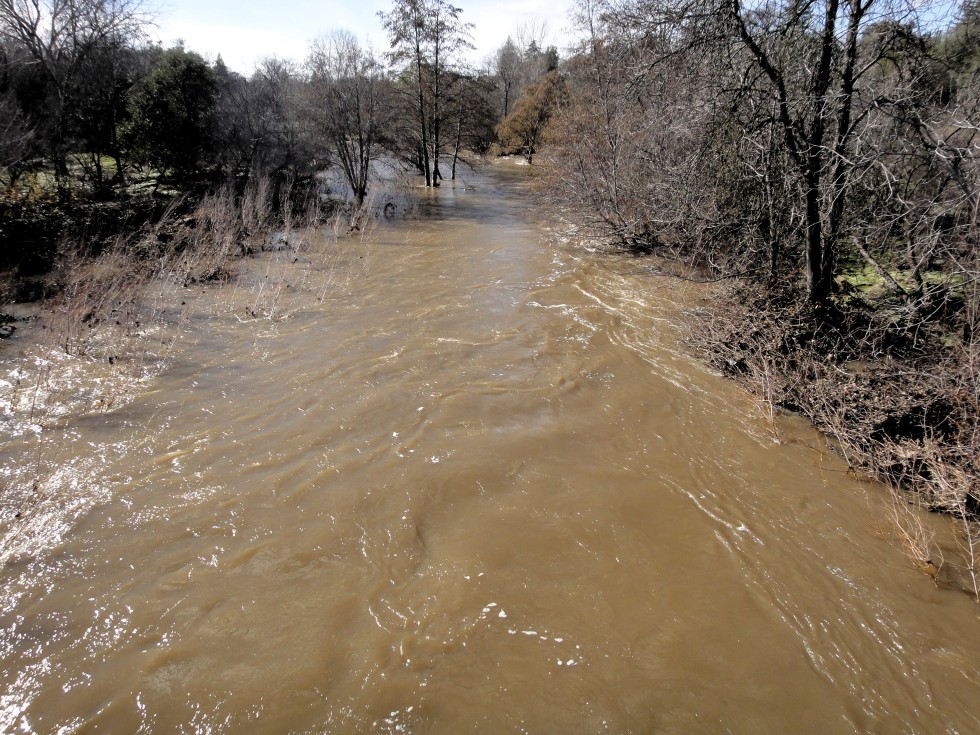 Looking West From the Pedestrian Bridge 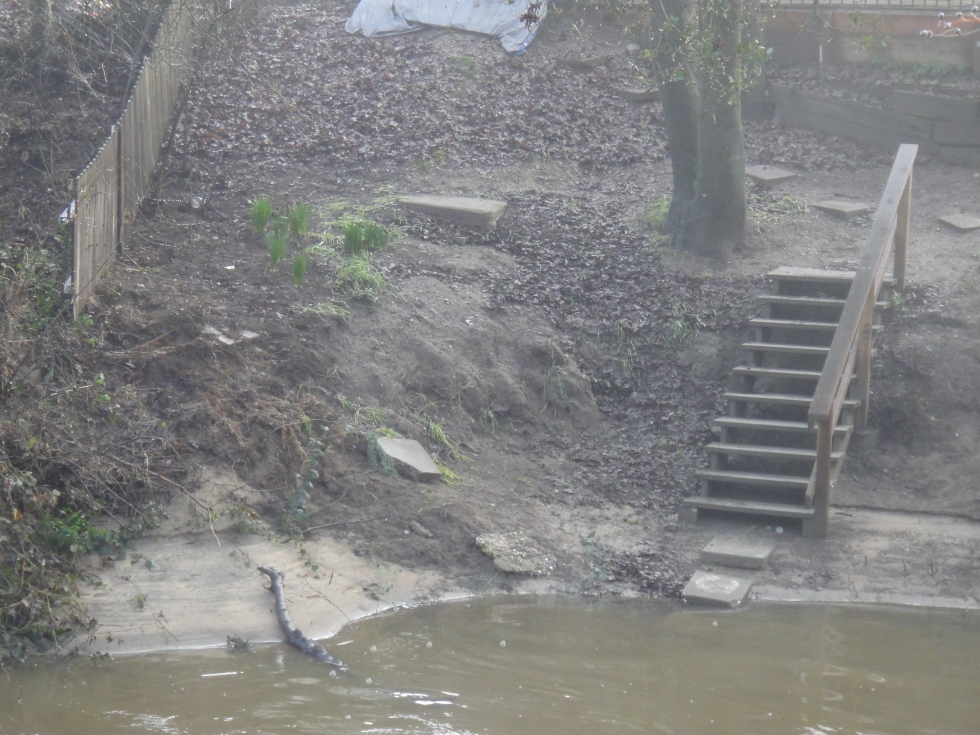 My creek level gauge, neighbor Dan’s steps. There are ten steps and three concrete stepping stones. I know this well. Here is about the normal Winter water level. 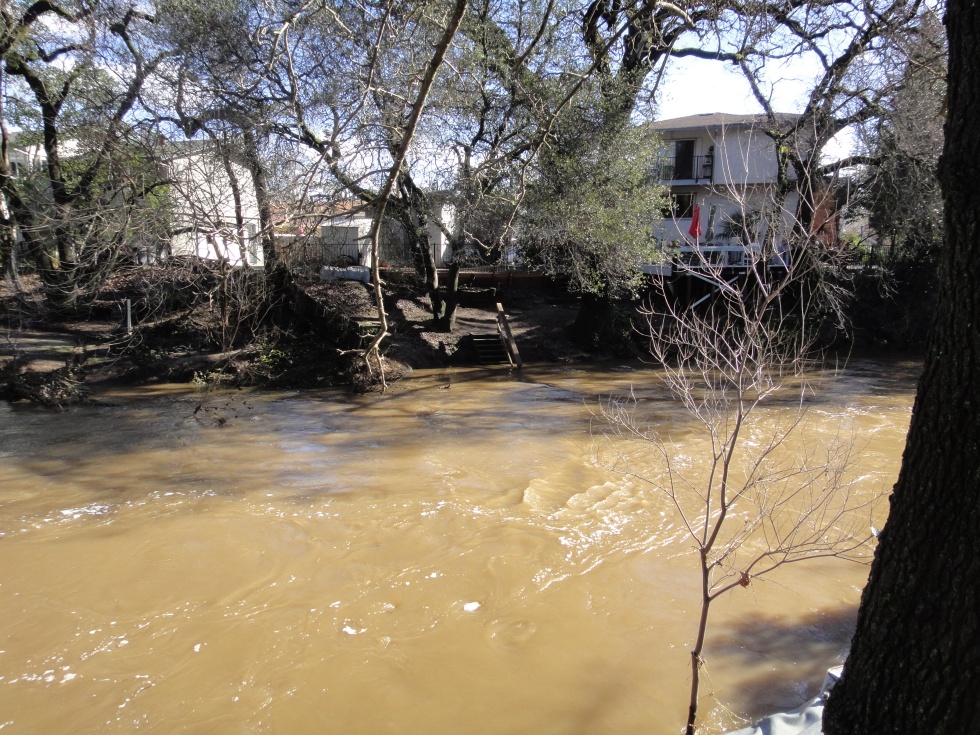 Scary even for all my neighbors with their elevated, flood-proof houses. Worse for us because we didn’t spend the $50k extra to raise the house 4 to 8 feet (1.2-2.4 m). My neighbors literally look down on us. 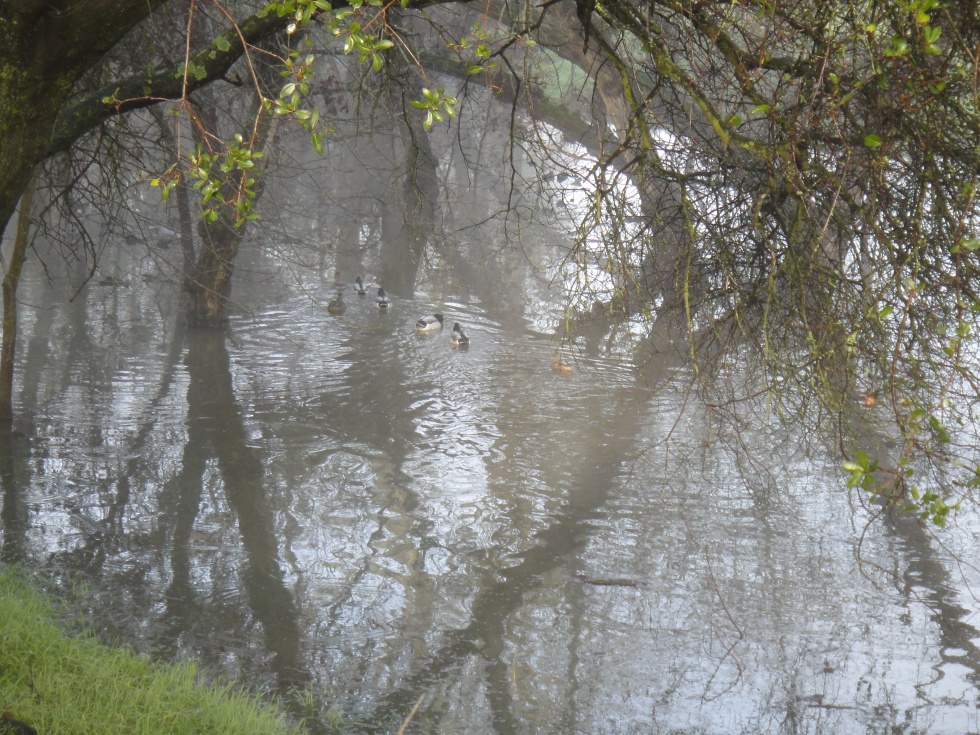 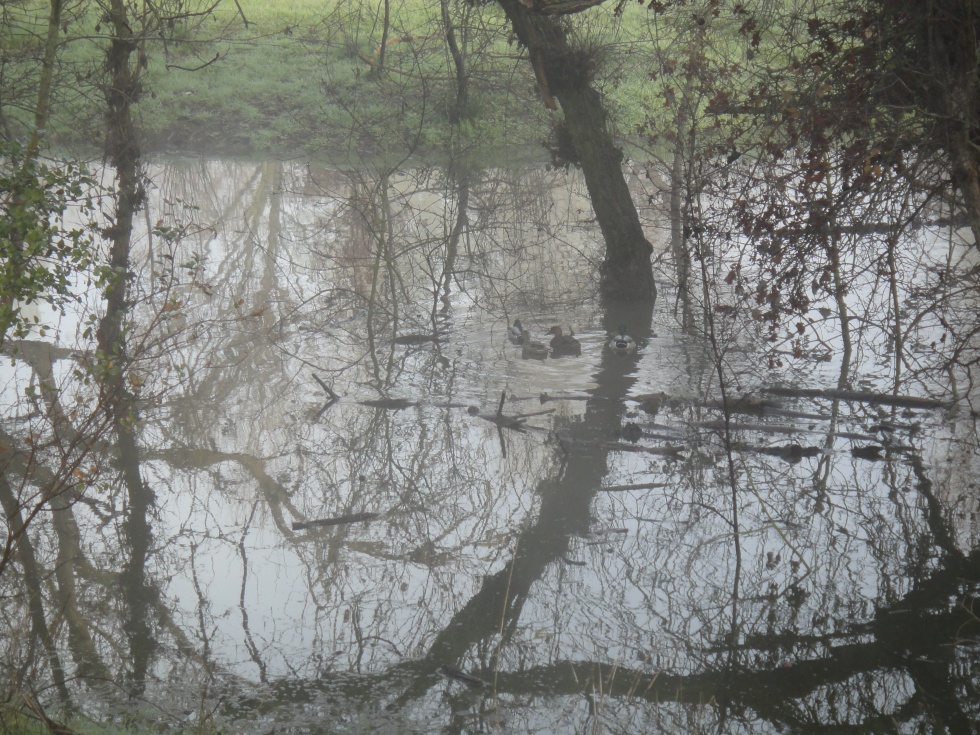 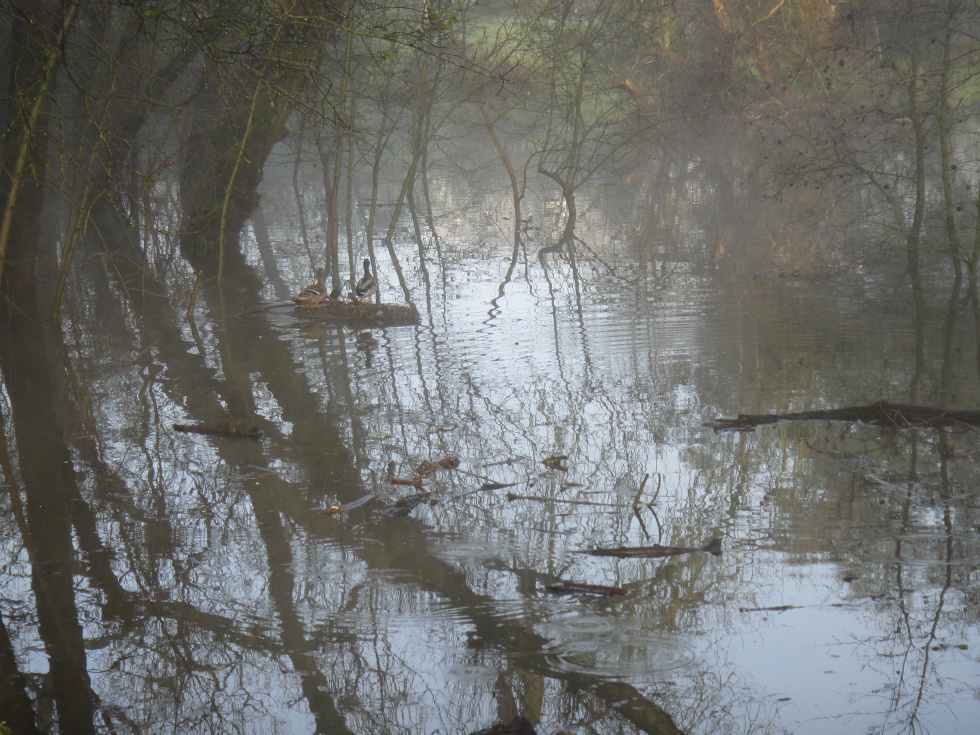 But it was, as they say, nice weather for ducks. These temporary ponds have already turned into mud bogs. 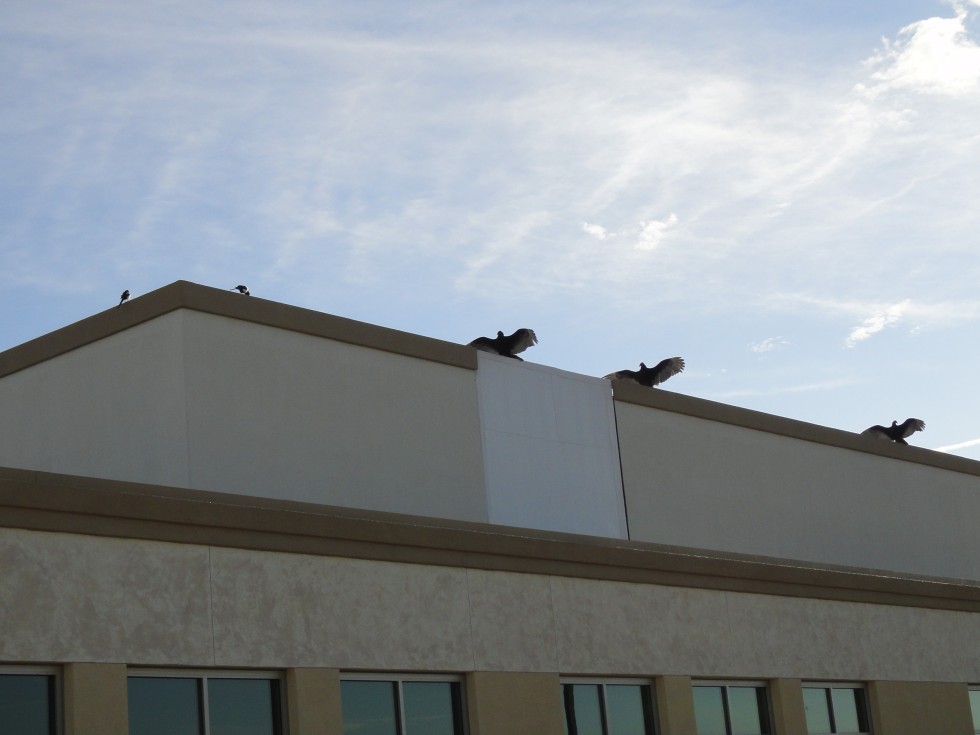 These turkey vultures,  (Cathartes aura), did OK during the flooding. 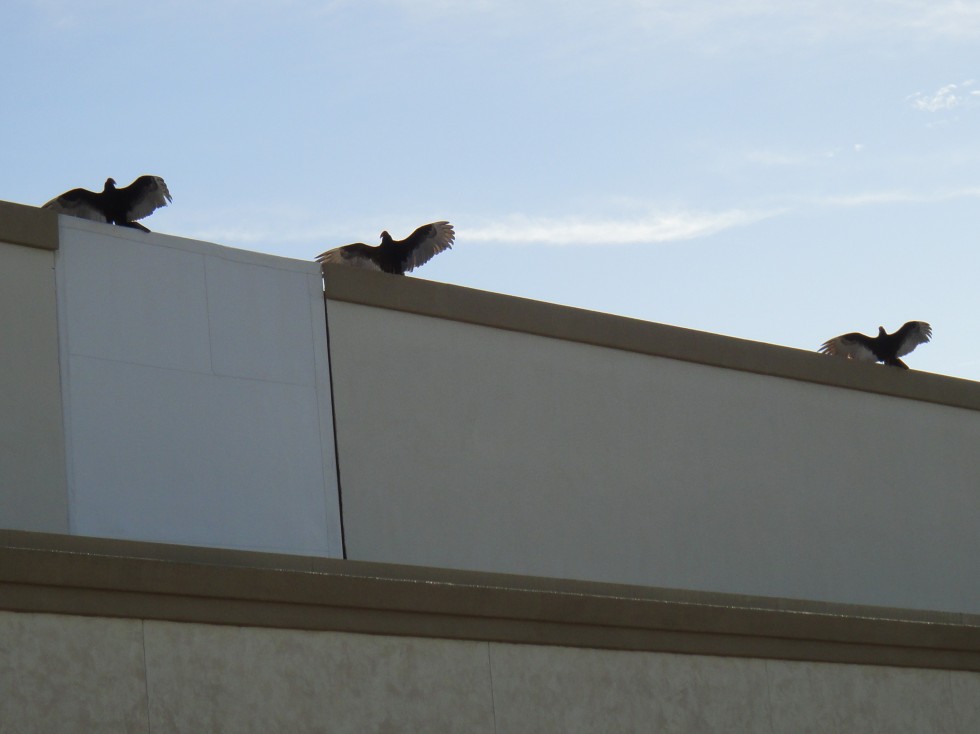 Catching the Morning Sun on the Blueline Parking Garage on Vernon St. 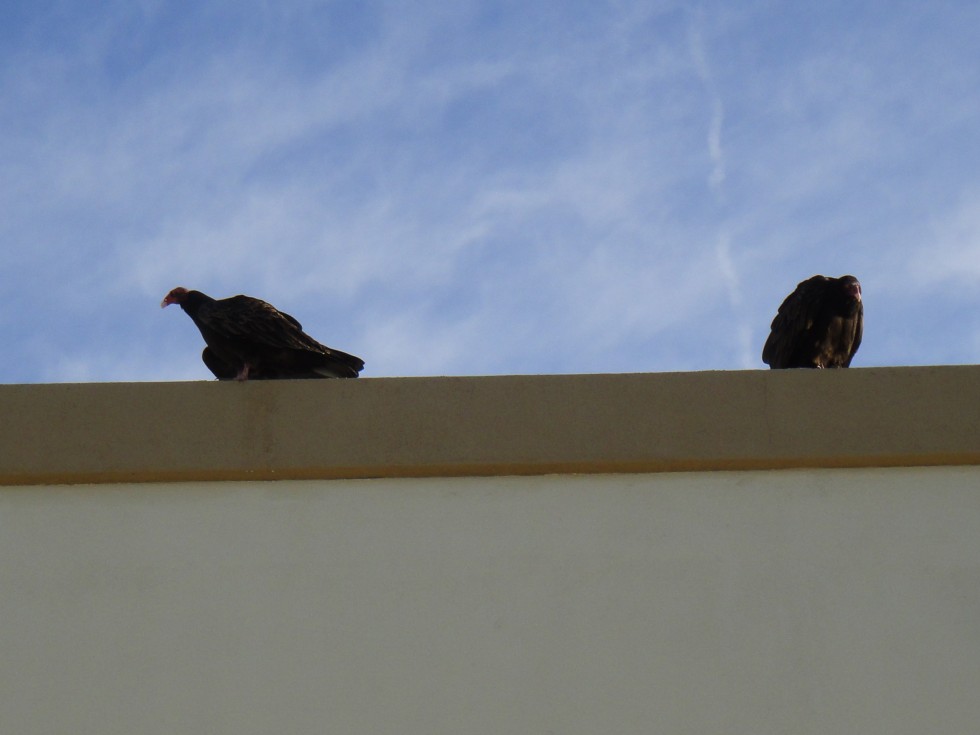 Below are wild turkeys, (Meleagris gallopavo), doing mating displays. The females don’t look very impressed but they do move fast when the males violently peck them. Fifty shades of something. 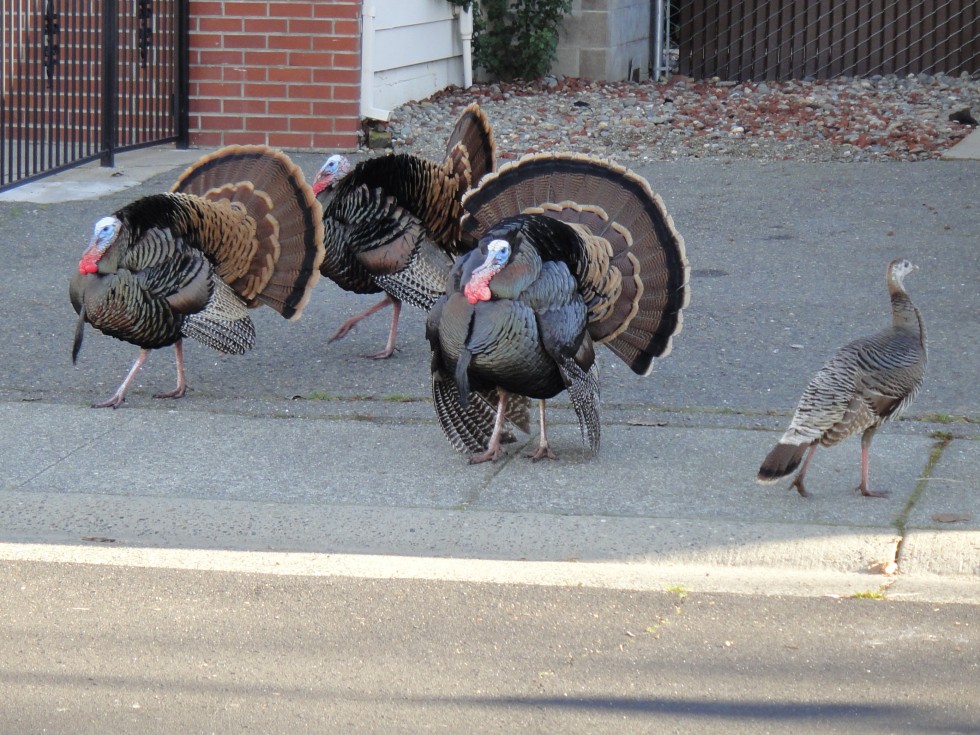 The big guy on the right was surely the bull turkey of the flock. His wings droop so much they make a sound like a stick dragging on the asphalt as he struts along. 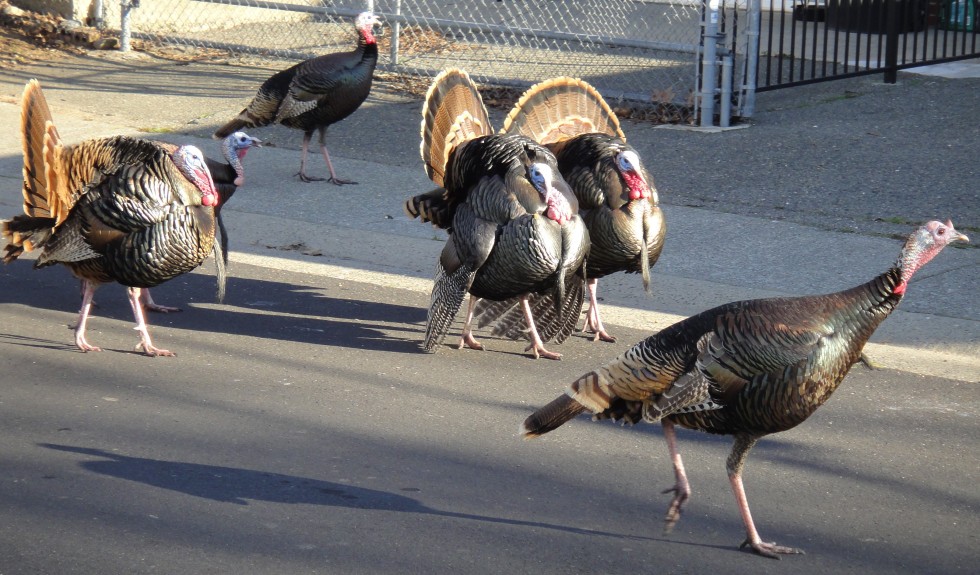 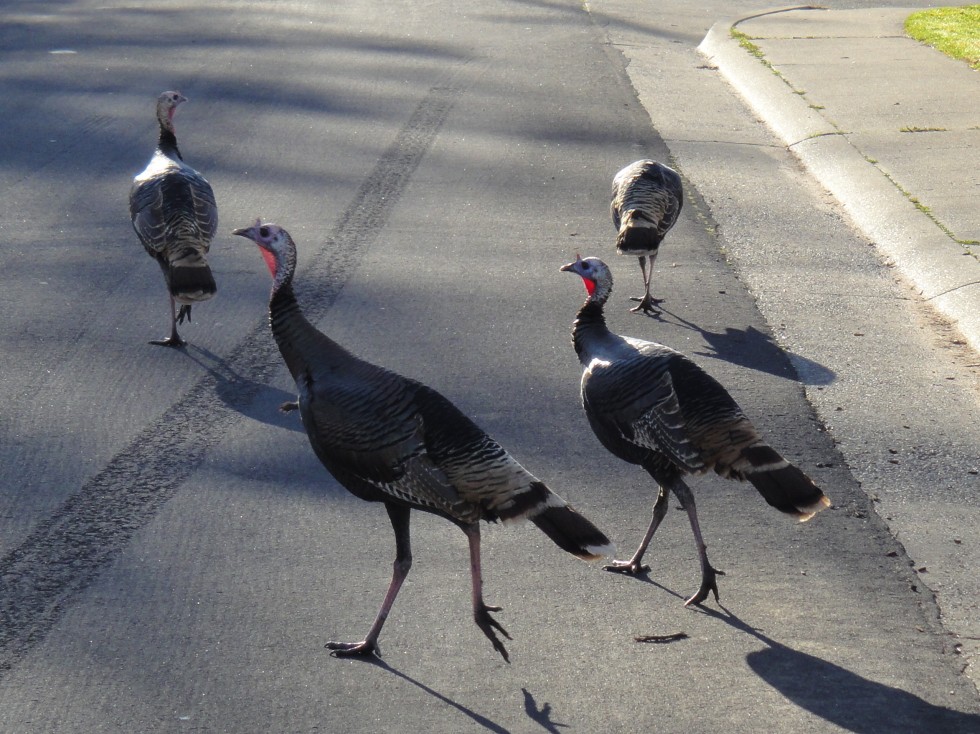 Since nobody hunts them these ‘wild’ turkeys are pretty far from wild. And unlike WKRP in Cincinnati they fly quite well, if only for a short distance, shooting up at about 45 degrees, STOL birds but not marathoners.

Unless noted, all text and images produced by todgermanica.com. Noncommercial use free with attribution.