I drove from Roseville to El Dorado County’s Loon Lake via Hwy I-50 this time, just for a different view, but it takes at least a half hour longer using 50 and Ice House Road.

It felt too late to fumble with the boat so I hiked a half hour to one of the flatter free campsites on the ‘Pleasant Arm’ of Loon Lake* and threw down the tarp, old air pad and new REI Lumen 20 sleeping bag. 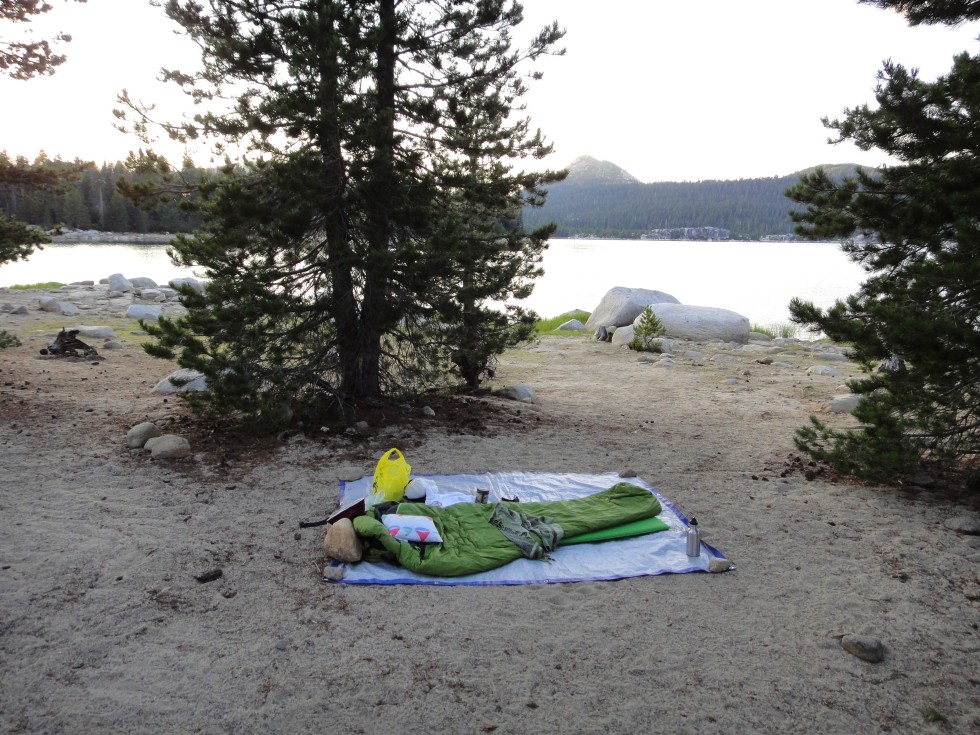 No tent needed since no rain, no bugs and no bother, my only camp visitor being Ms Rana below.

Since the Sierra was often ice territory, giant glacial erratic boulders abound where dropped by the last ice sheet. 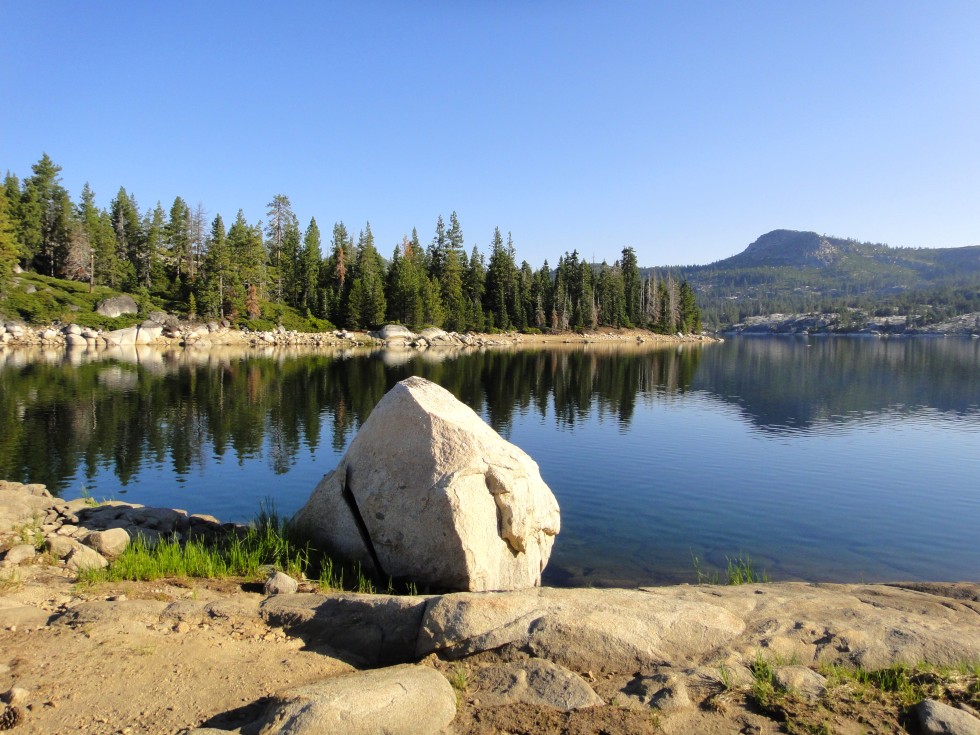 Water was still high so the entrance to the Buck-Loon Tunnel, which supplies most of Loon Lake’s water from Buck’s Lake, was underwater and not visible. 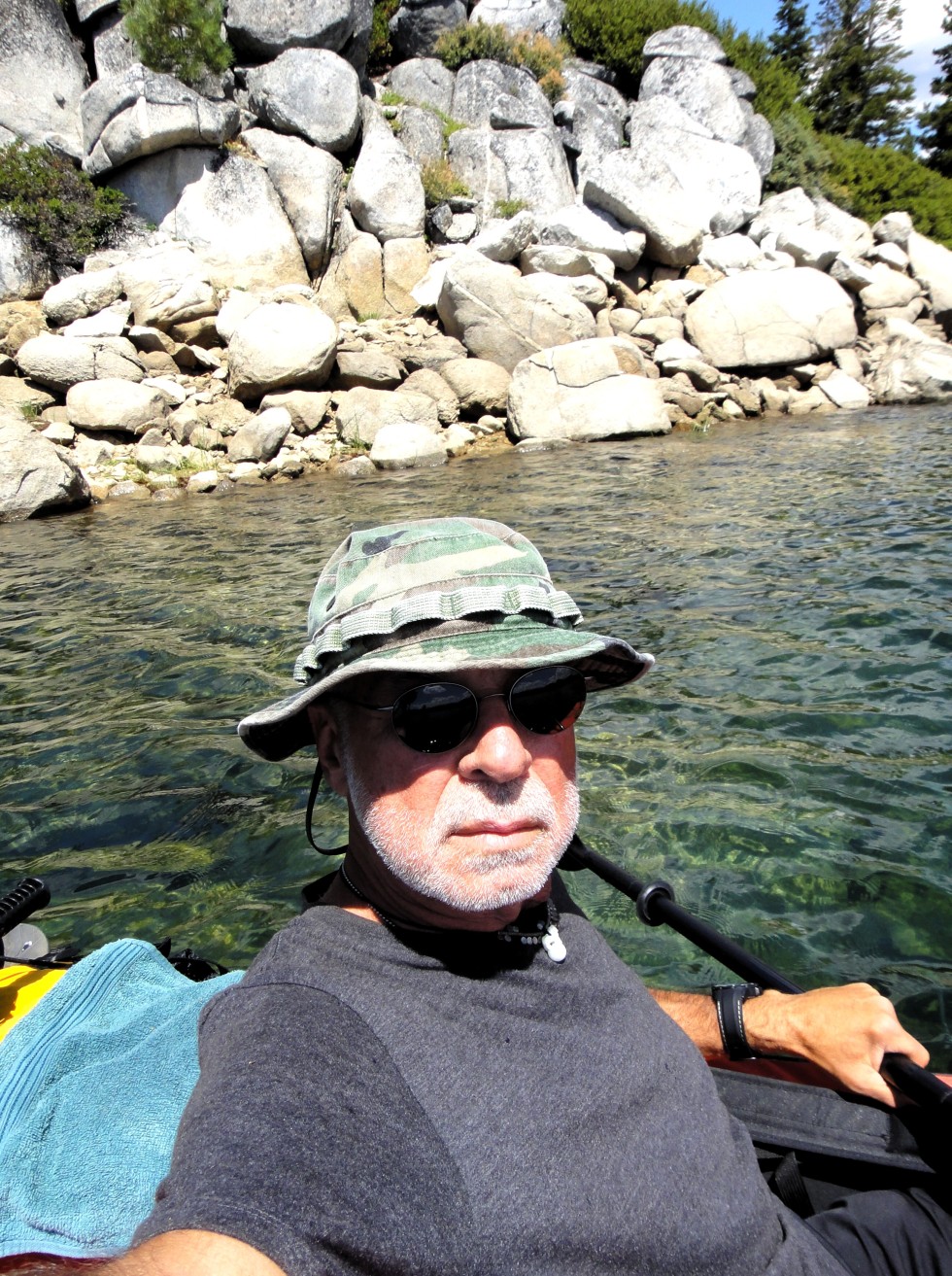 Not looking very happy on Tuesday with the boat’s bad steering and weather-cocking. Deflating it at the end, I discovered the expensive Czech Republic fin skeg was missing. That explains a lot. But at the time all I could do was press on into the lake’s strong wind, curse the Innova Swing I, and try not to do 360° whiff-er-dills with each stroke. 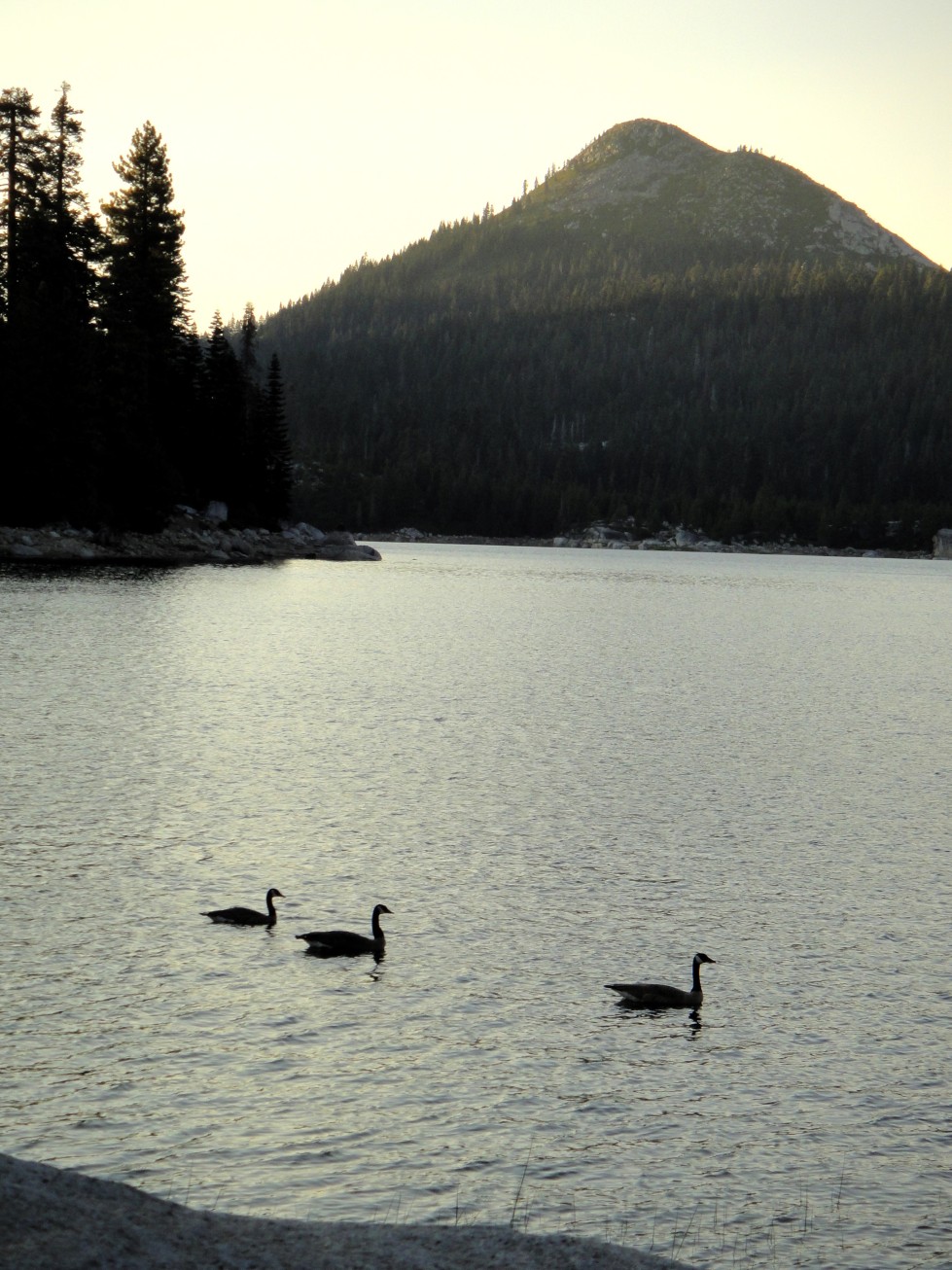 Wildlife was mostly Canada geese and the eponymous loon families, the latter birds always with only partially blown ballast tanks. Taken morning or evening, the only time it’s calm. 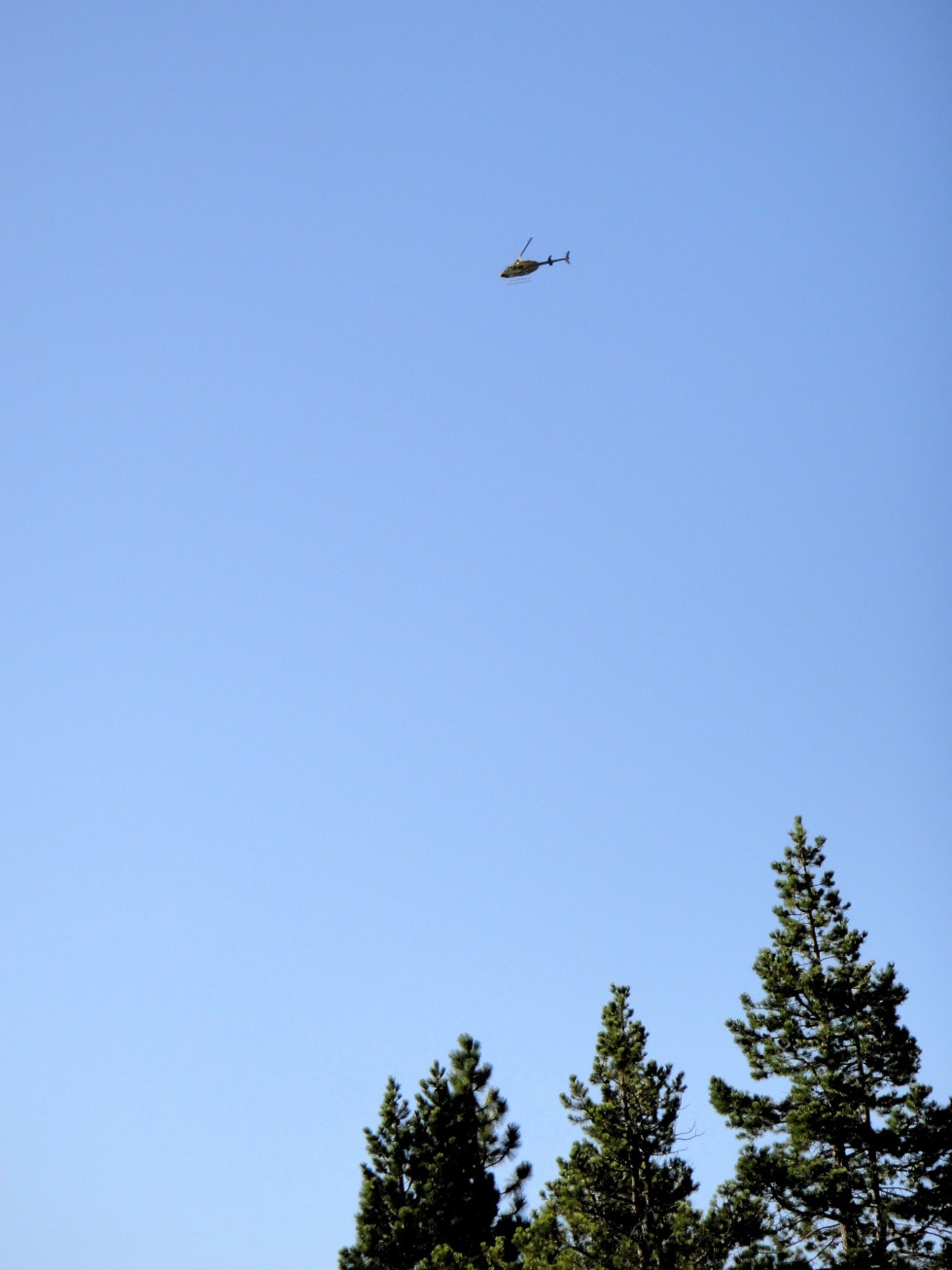 Choppers fly over Loon Lake all day, I assume to supply Rubicon jeepsters with beer, Champagne, 30-weight to burn or drizzle on nature, and lobsters, but I’m just guessing. 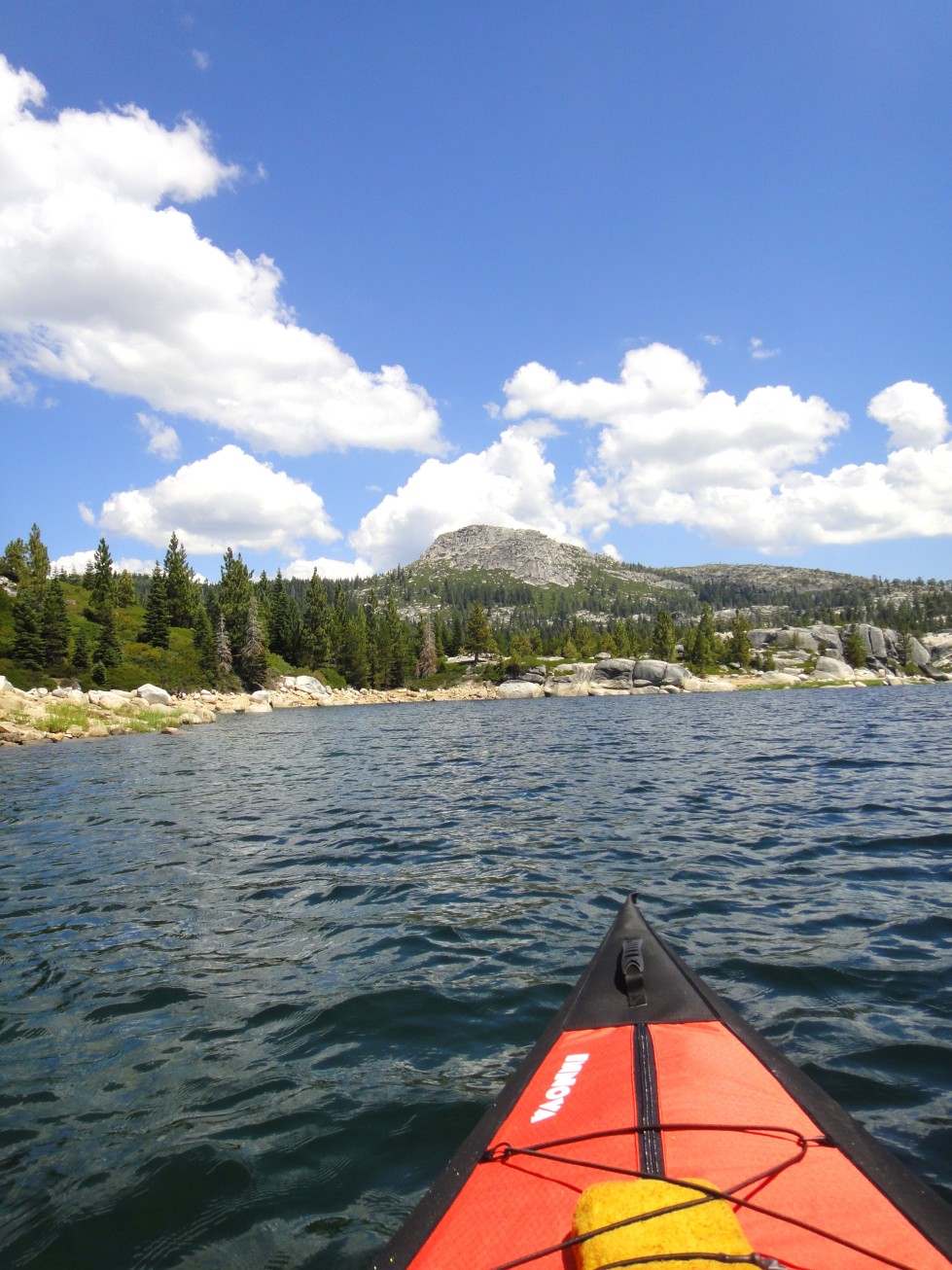 Zippered bow entrance is unnecessary and leaks chilly water on your legs-hence the boat sponge.

Hard to believe the radical bow swings in the skeg-less kayak, my ribs and shoulders still ache (but so does everything else, I’m sixty-six with osteoarthritis). Guess I’ll build a hardwood replacement, tightwad cheapskate that I have the honor to be.

Sling seat doesn’t quite allow full upright seating; hammer-toe surgery toes rub on front deck if bungee cargo straps are used; I removed the useless foam/nylon foot rest and just crammed a dry sack of clothes in the bow to brace against.

With the boat’s small cockpit and my dickey right hip, getting in and out was a chore for me. I solved landings by pulling both legs out and resting them on deck-the right leg by tugging it out partly by hand-so on grounding I’m not trapped inside.

One peak’s north-facing side still has a small glacier from the abundant snow last year. The Pleasant Lake Arm side of the lake is more scenic but Union Valley Reservoir and the jeepsters’ beloved destroyed Rubicon Trail get more visitors than Loon Lake.

Contrary to my expectations the downwind paddling was wilder and more erratic than upwind and I was happy to get back to the car, and to know the reason why it was such an ordeal.

I deflated and packed away the boat, loaded up the backpack, hiked back to the same campsite on a spit and slept very well. Low patches of soft white clouds scudding in all night E to W helped by obscuring the landing light glare of the full moon. 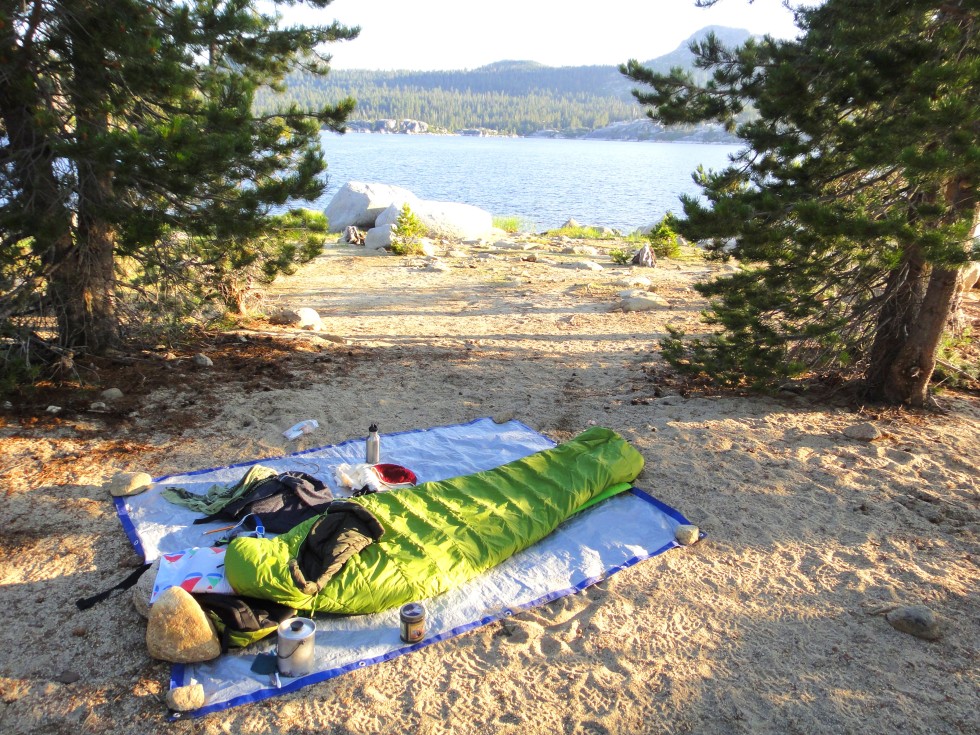 Level, soft, shaded and not on top of bugs is the goal, never quite achieved the the state of nature (or Jefferson).

Here’s where the tarp, air pad and ‘fart sack’ come into play. If it’s not 100% level (and it never will be), align to the ‘fall line’, with head always higher than feet; tarp keeps off the dirt and bugs; sleeping bag shelters from dew, damp, wind and cold.† 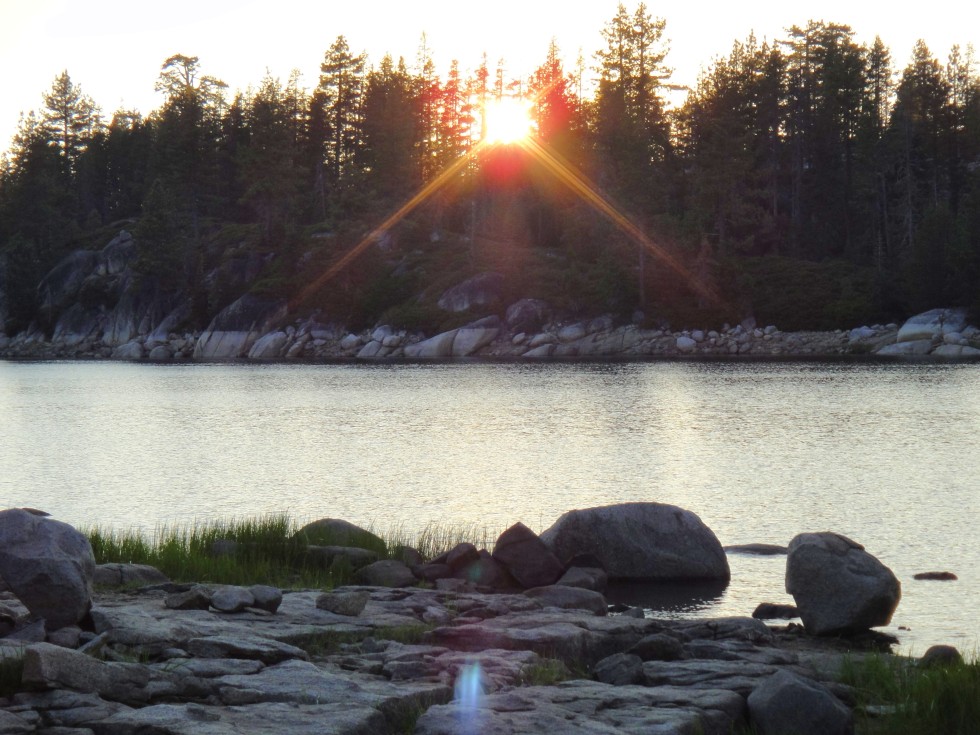 A happier selfie just before hiking out Wednesday morning, about two days early due to boat failure. I was planning to also circumnavigate Wright’s Lake ten miles to the South but the skeg ending up in Davey Jones’s locker scuppered that plan. Note blood on nose, the least of my pains, triumphant in my circumnavigation in 6+ hours despite equipment failure [or maybe operator error]. 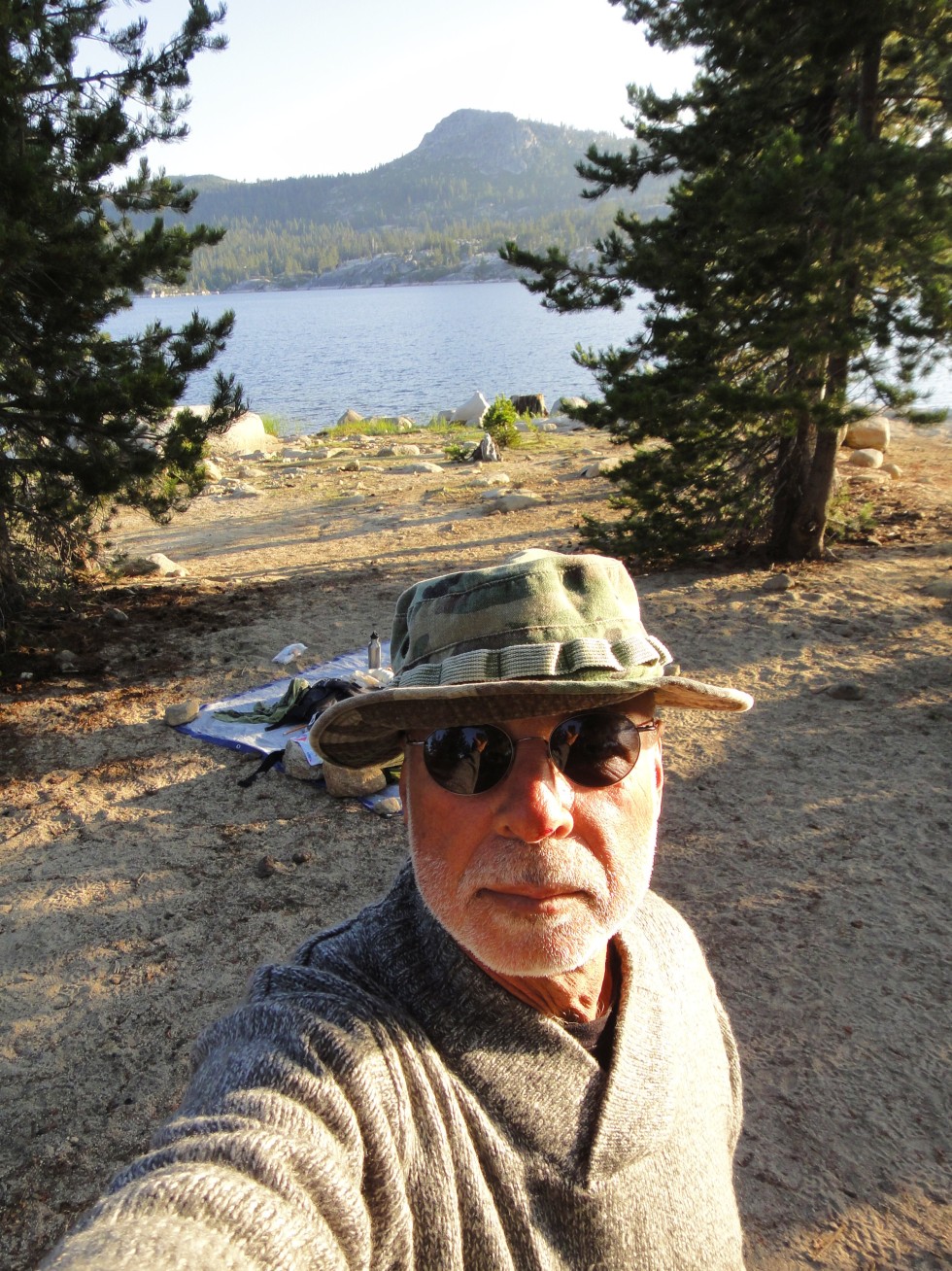 *It is popularly referred to as Loon Lake, although strictly speaking this is the name of the former lake now inundated by the dam. Boaters still refer to the northeast portion of the reservoir as the Pleasant Lake Arm, the portion over the inundated Pleasant Lake. Wikipedia

†Thanks to REI COOP for a full refund on my former failed North Face bag from REI (zipper jams) in exchange for a better REI brand synthetic bag (rated for 20° F! -ha, ha, as if).