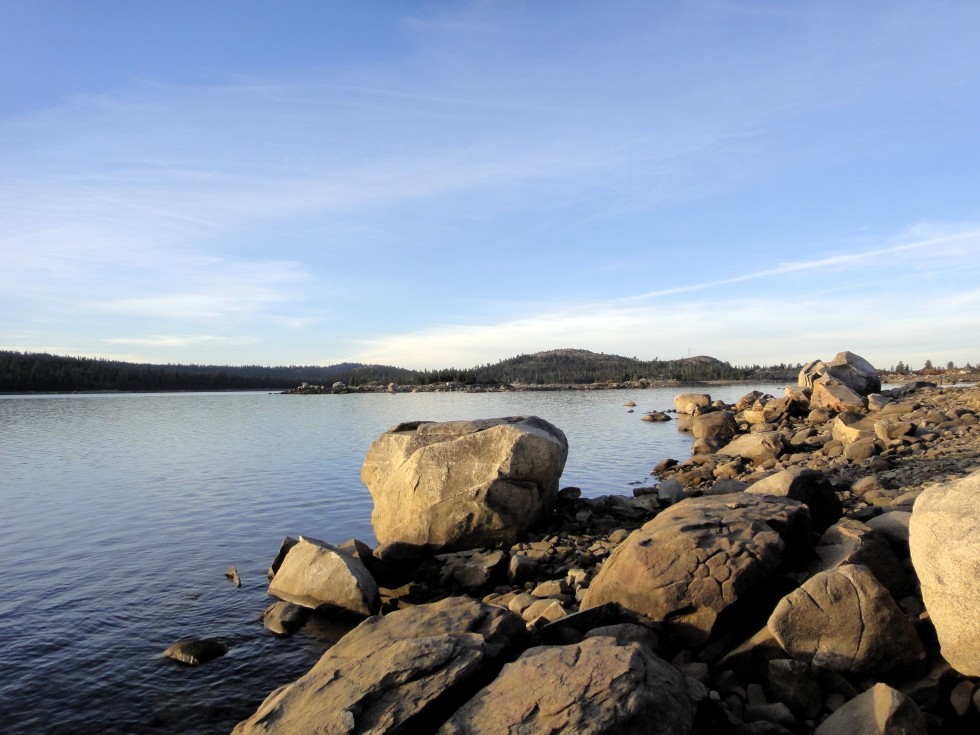 I keep coming back to Loon Lake, just West of the Desolation Wilderness, for the geology and the quiet.

Despite knowing by now that it will surely be crowded with Rubicon Jeepsters©, the famous off-road eco-rapers and polluters- and other campground yahoos.

Nice camp, I think. Flat spot for my tarp; pick-a-nic table for the bass and amp. 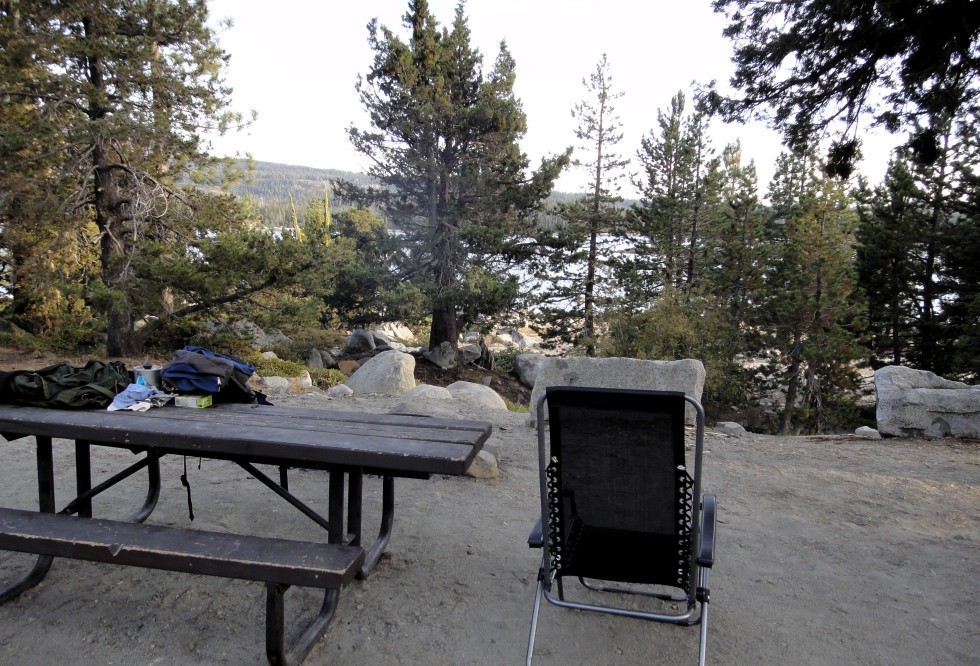 View of the lake through the scattered trees. Sunset was gorgeous, what with California’s fires, the pollution and the airplane contrails. 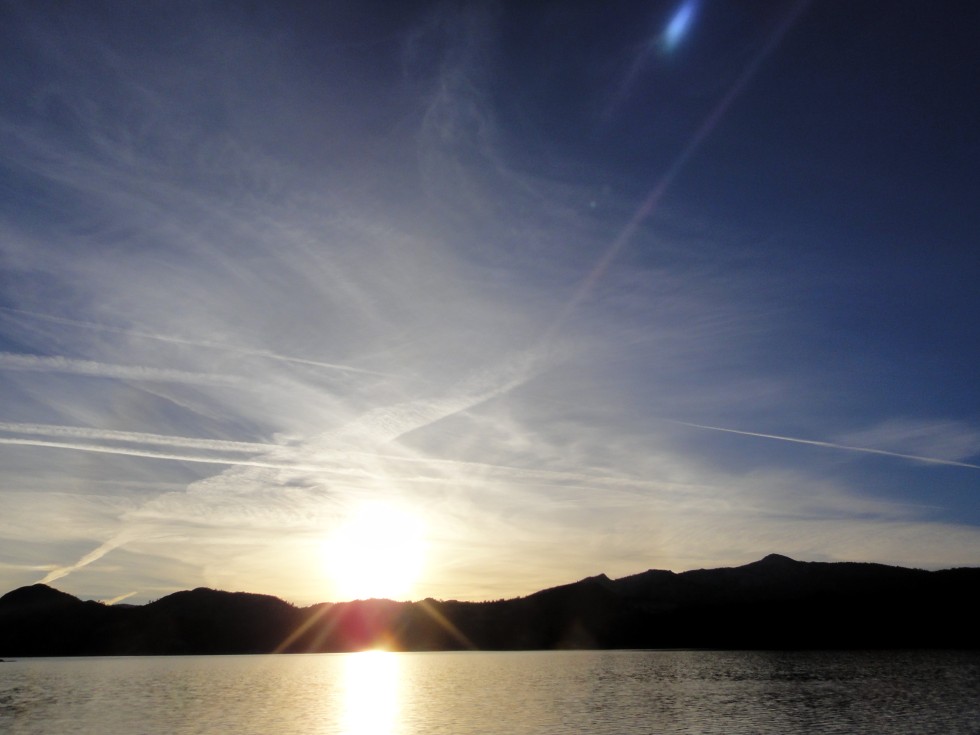 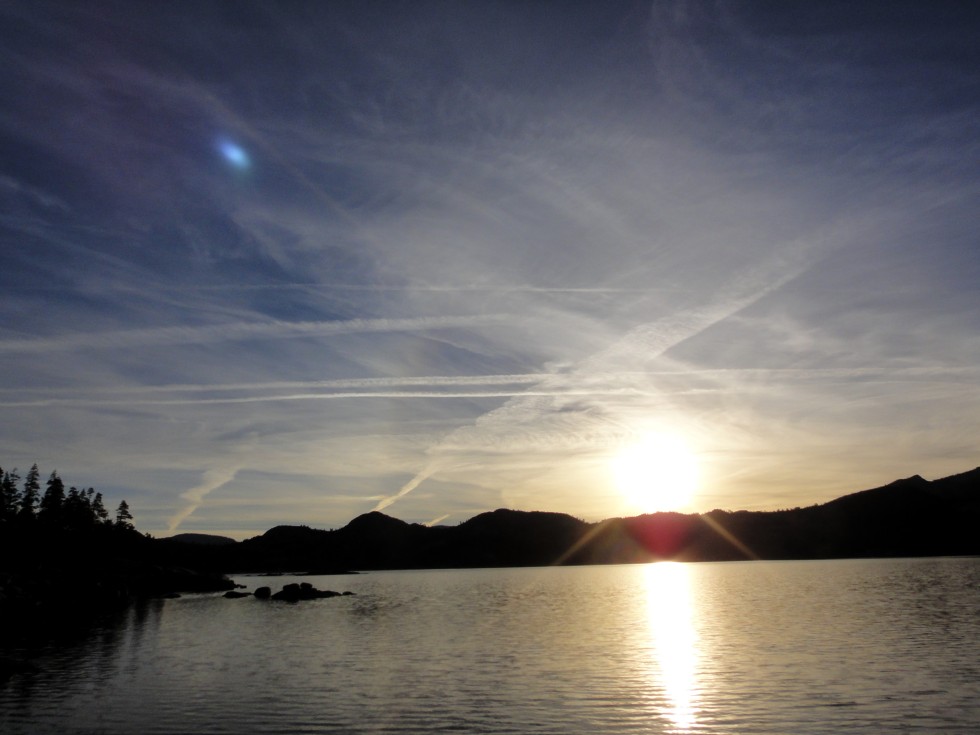 But Russian boys on quads drove around the camp raising stinks and dust. Then, I kid you not, sawed logs with a chainsaw until dark. Just like in mother Russia, I suppose.

Then the Jeepsters© in the next camp discussed at great length over a few beers a lawsuit involving an ex-wife and a feral pet dog with a short temper. RV generators. Then, after the yakkers drifted off, distant gunshots. Ah, wilderness.

But the exposed geology remains stunning when you escape camp. 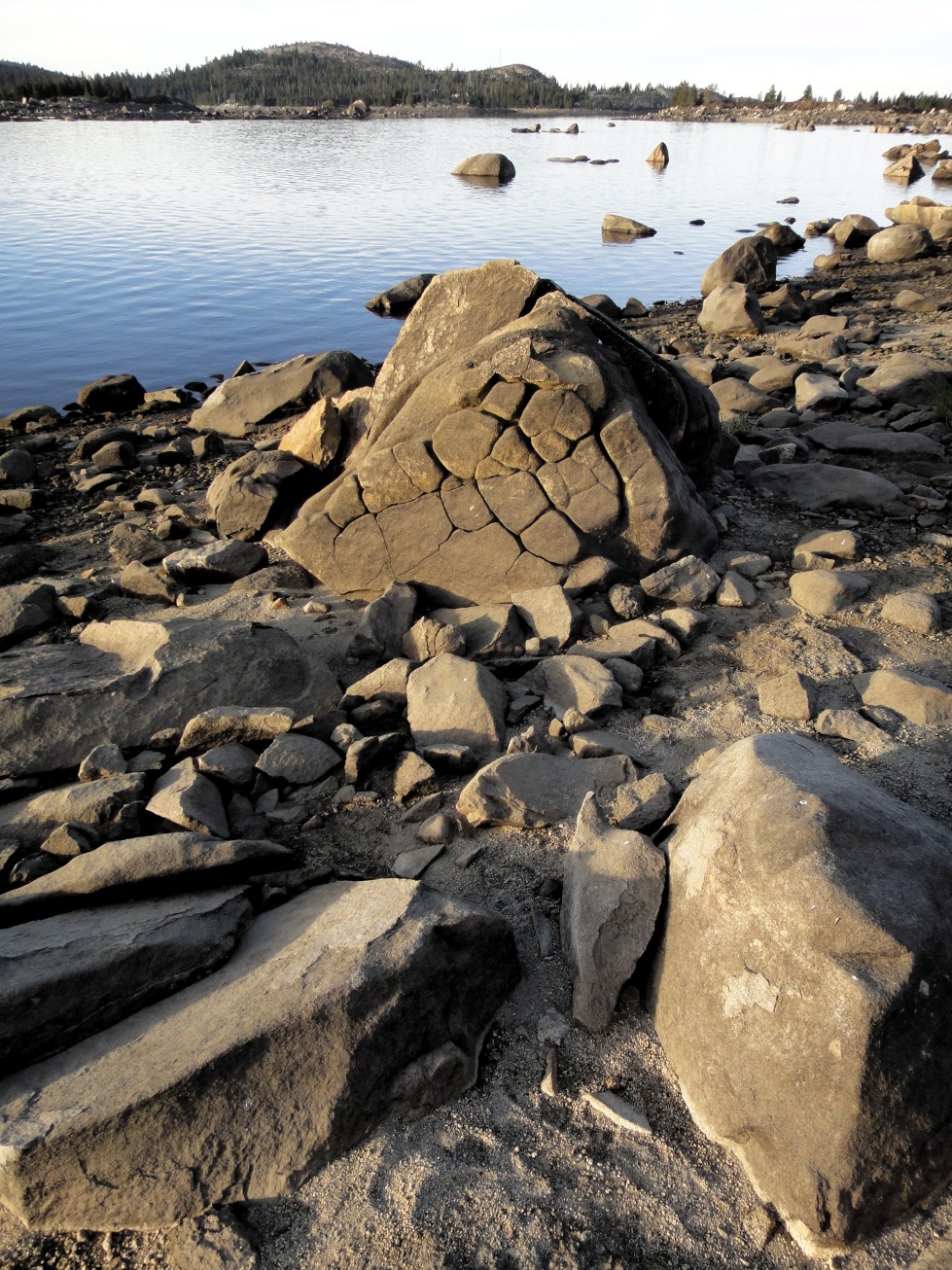 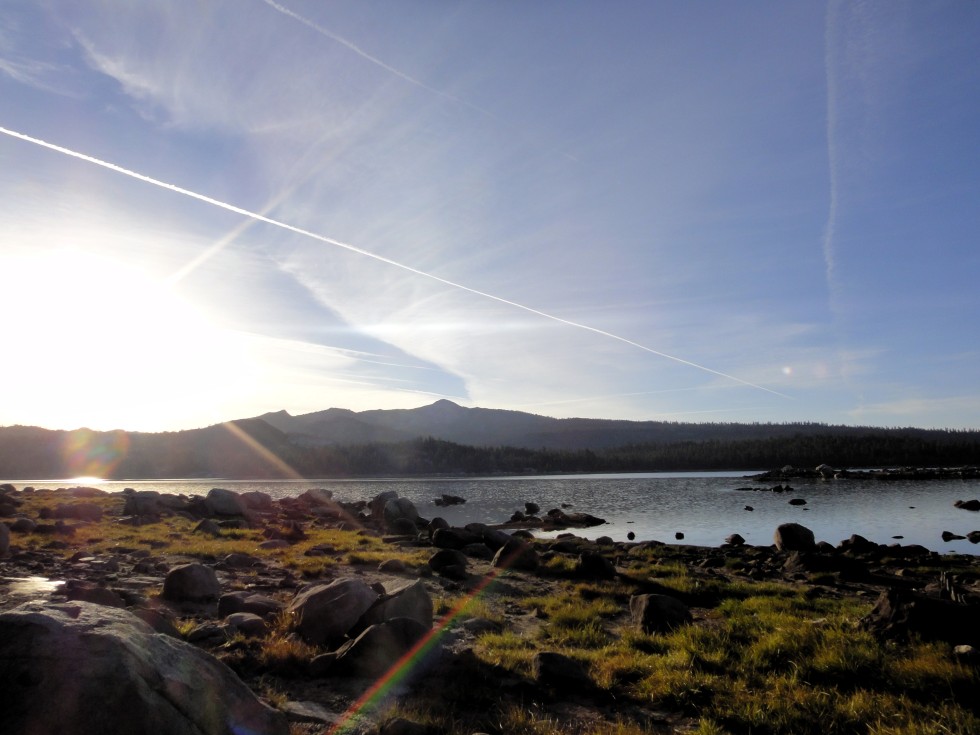 Glacial erratic boulders of all sizes are everywhere, sinking down and resting wherever they were when the last Ice Age ended about 10,000 years ago.

Mostly granite or granodiorite, it’s a tough rock that, paradoxically, likes to fracture and exfoliate due to cracks and faults admitting water.

The water freezes during the Sierra winters, wedging apart the already abundant cracks.

At about 2m, (8ft), this erratic cracked at this sill or dike caused by late magma intrusion. 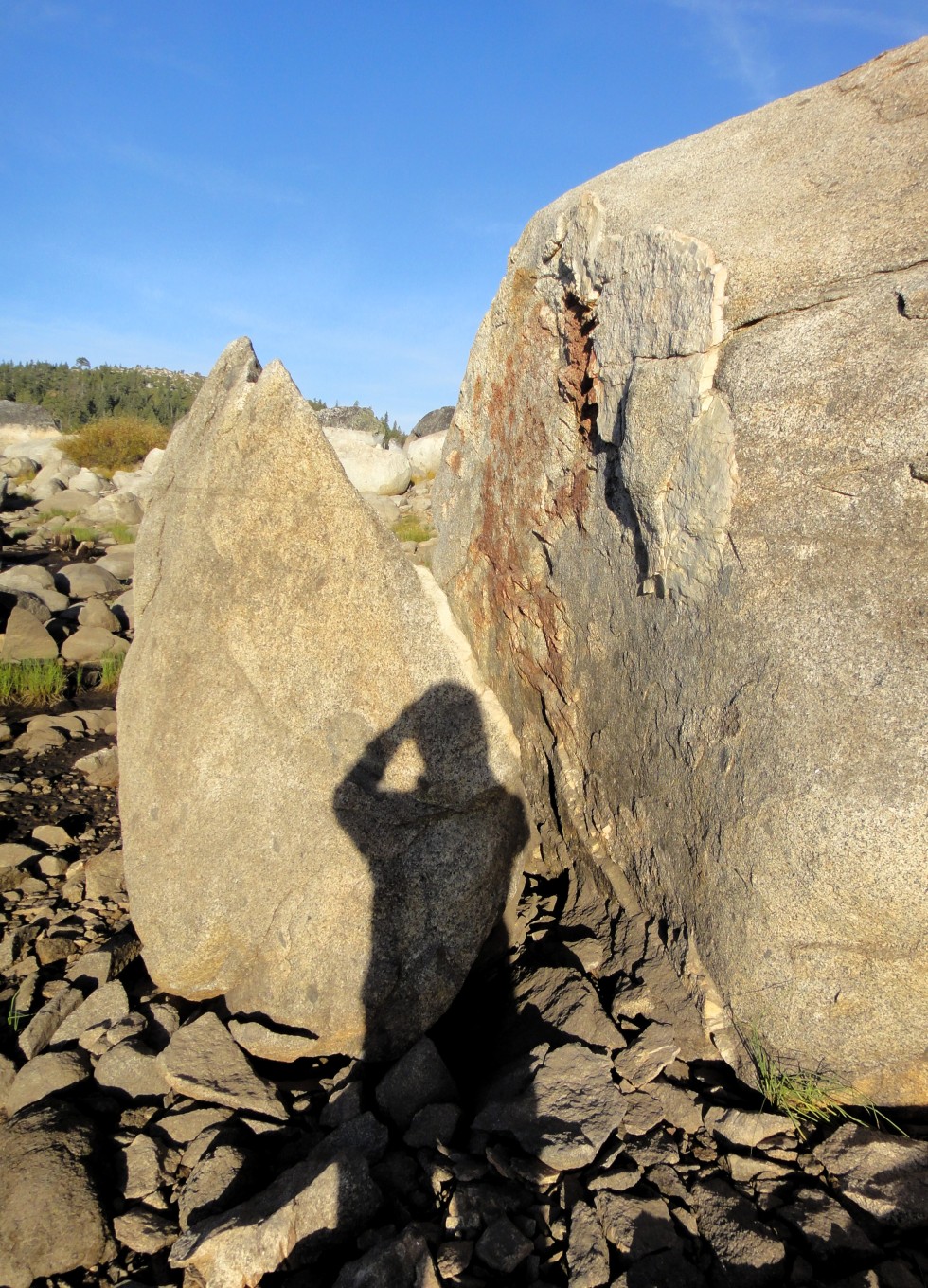 This boulder is the size of a mother-in-law cottage. 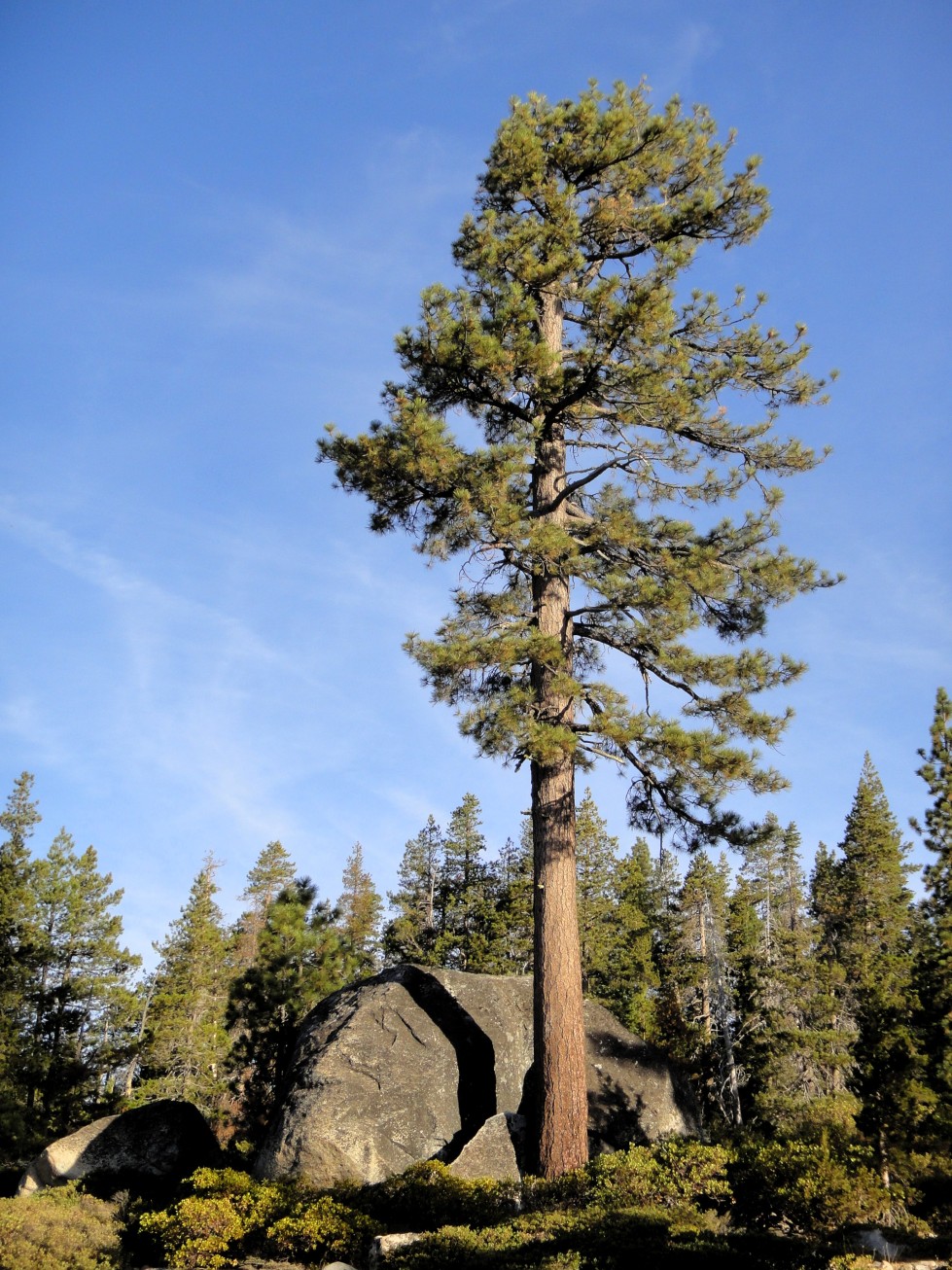 The dam foundation was blasted out here.

Glacial striations are usually multiple, straight, and parallel, representing the movement of the glacier using rock fragments and sand grains, embedded in the base of the glacier, as cutting tools.

Large amounts of coarse gravel and boulders carried along underneath the glacier provide the abrasive power to cut trough-like glacial grooves.

Finer sediments also in the base of the moving glacier further scour and polish the bedrock surface, forming a glacial pavement.

Ice itself is not a hard enough material to change the shape of rock but because the ice has rock embedded in the basal surface it can effectively abrade the bedrock. Wikipedia 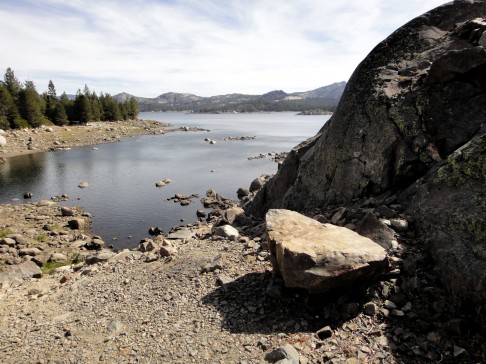