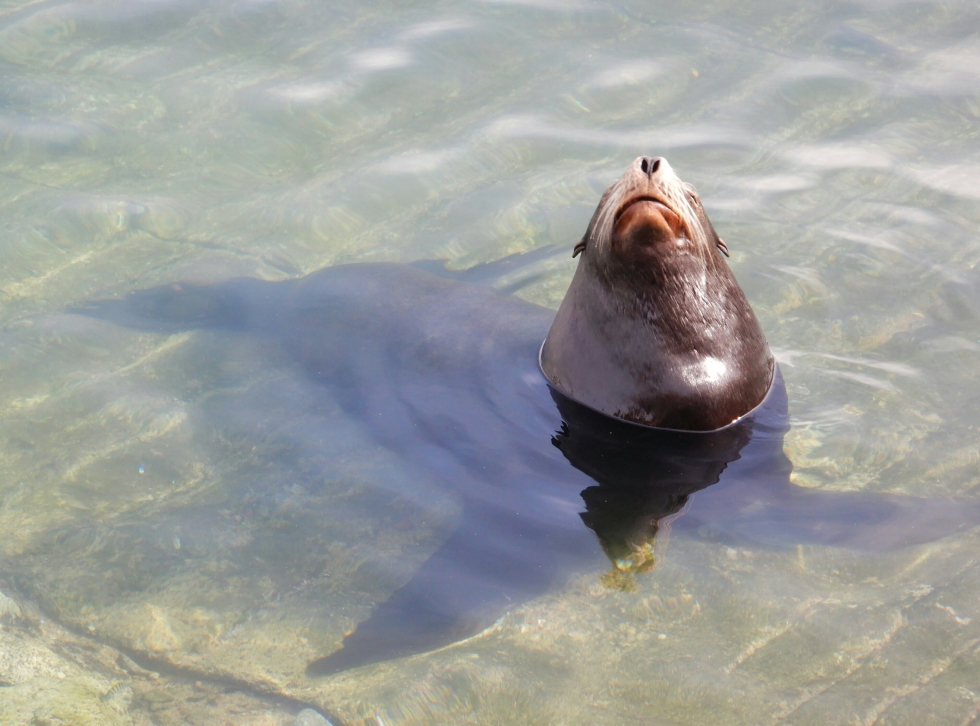 I just got back from the Caborey catamaran dive tour to the reef off Chileno Beach. 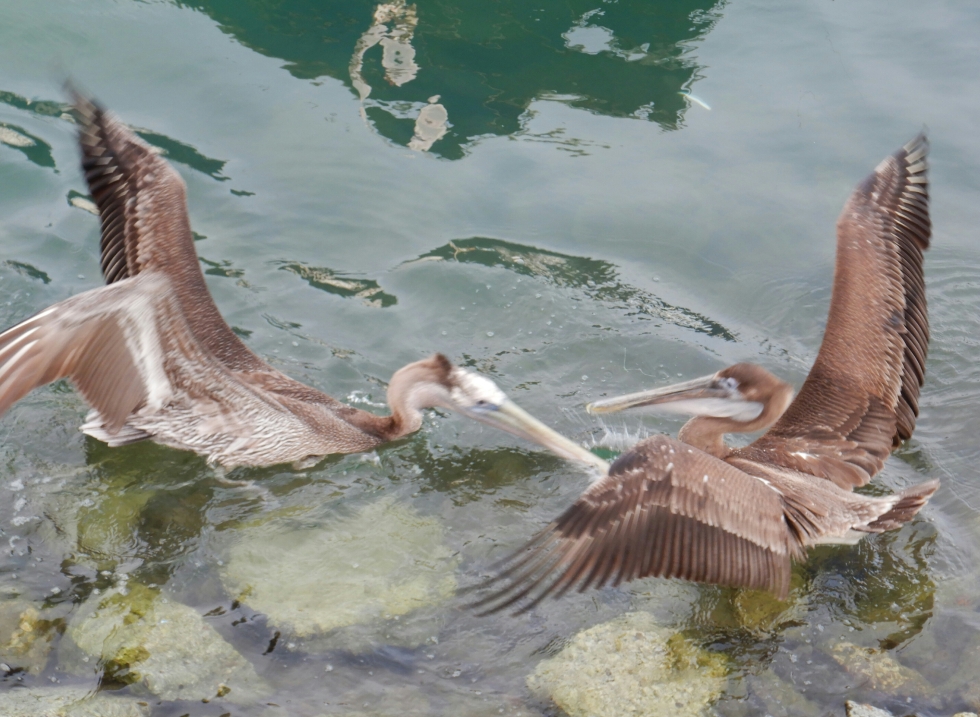 I’m not much of a tour peep but on impulse I bought a $80USD ticket on the street yesterday for the 2.5 hour trip from an attractive young woman in a booth. 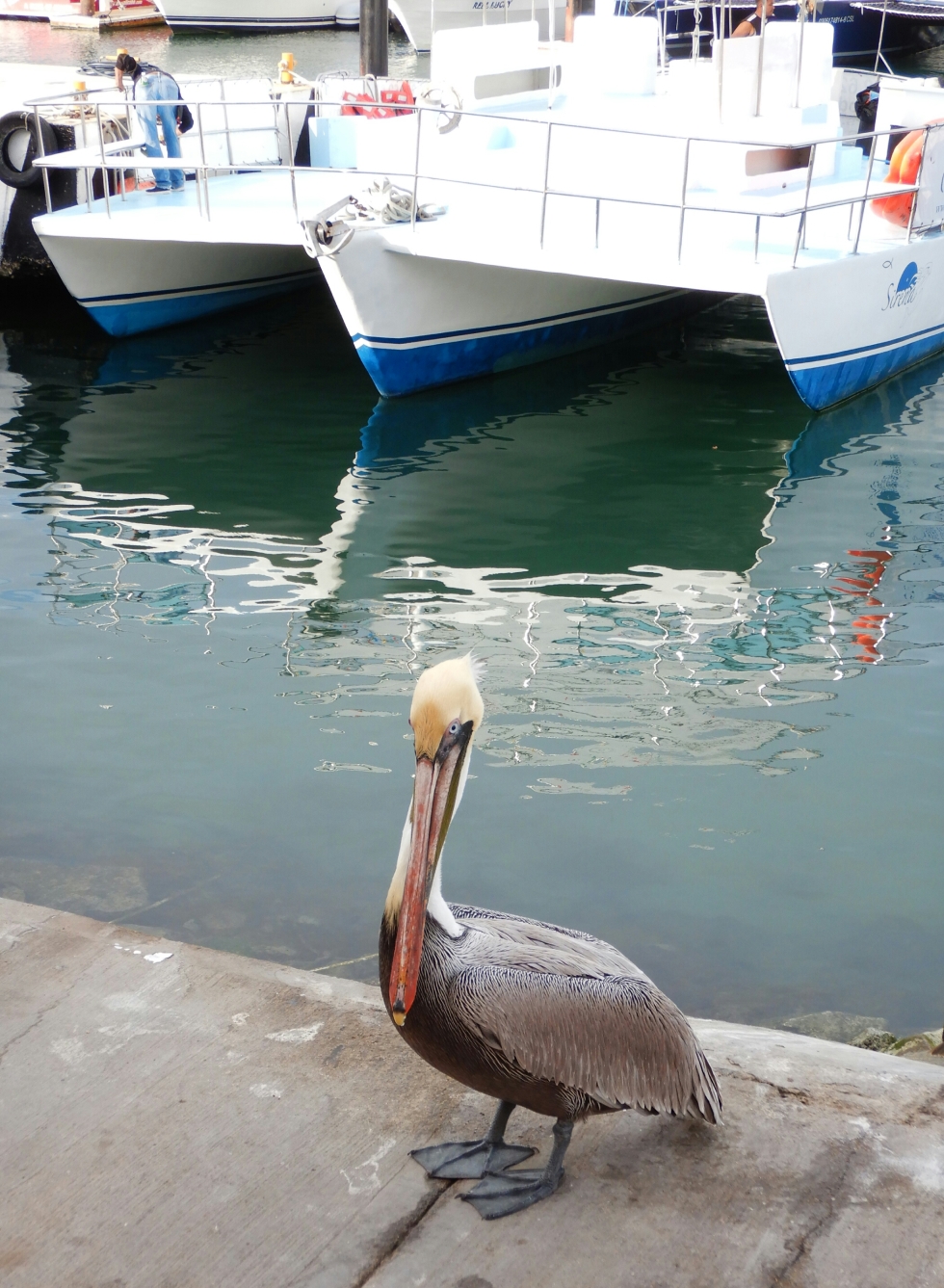 I didn’t price compare but it seemed pretty fair for what you get. I was not disappointed.

You assemble at 1100 at the far end of the very busy marina to board the big catamaran Caborey, the biggest cat in Cabo in the words of Joel, our personable guide and dive safety lifeguard.

You can start drinking from the open bar as soon as you board and most of my group of middle-aged/old Canadians and Americans did just that, though Joel warned that over-tipsy tourists would not be allowed to dive for safety reasons. 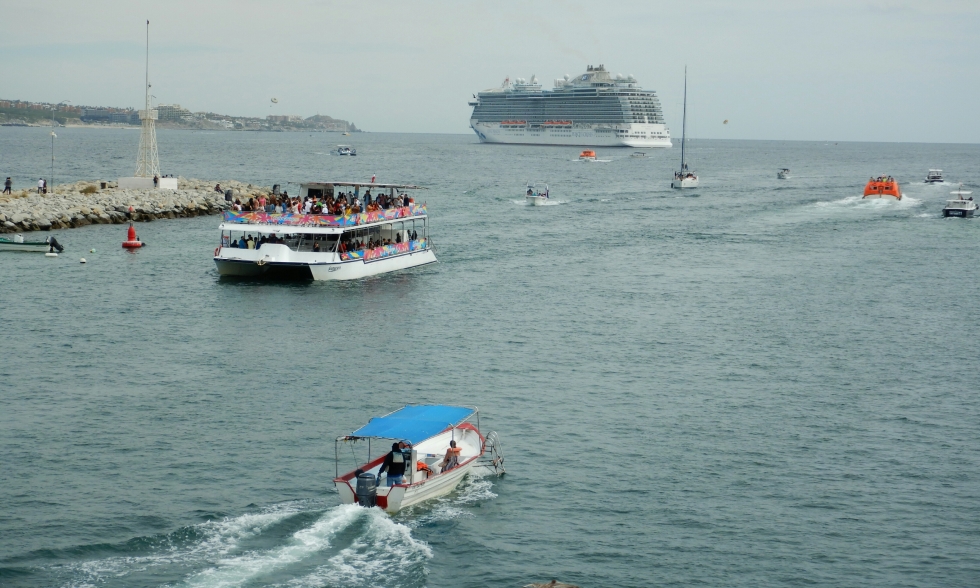 Now, I’ve walked three times to the marina, normally a twenty minute walk, for a normal peep. But with my directional disability I got lost EVERY.SINGLE.TIME. 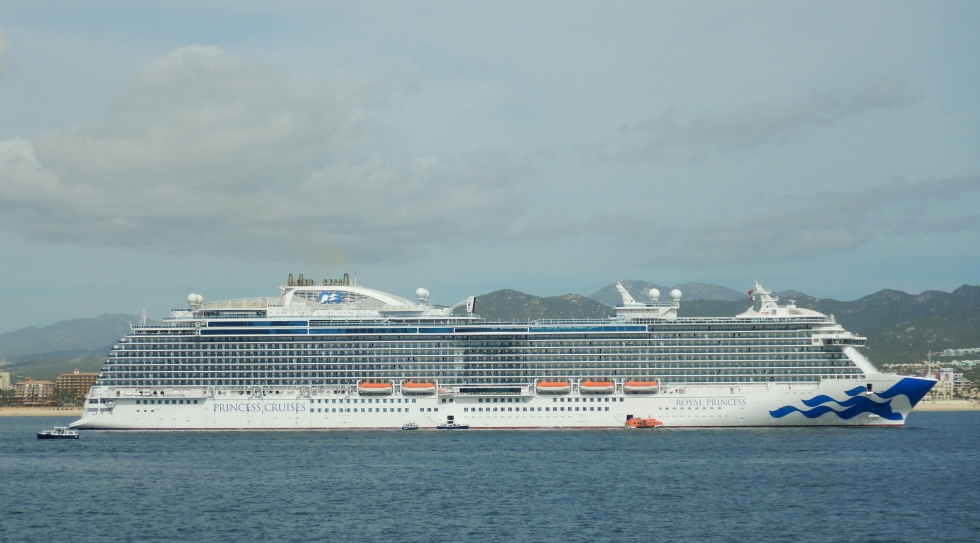 I don’t panic (much) because I know now at age sixty-eight that I WILL get lost, probably more than once. So I allow plenty of time.

So, lathered up a bit but still with plenty of time, I boarded the impressive cat and wandered around the three decks carefully avoiding the open bar because if everybody gets sick I might need to drive the boat.

I even met El Capitano, one of two, and he let me enter the pilothouse and take pics. Again, high tech with radios, radars, and whatever all those instruments were.

So you chat with your fellow elderly gringos and drink while you clear the busy marina and turn north to the Corridor, the crowded and hideously over-developed strip of coast between the two cabos, San José del Cabo and Cabo San Lucas.

The tour starts with the most famous rock formations in baja, the small islands and beaches and fingers of rock at the very tip of the pennensula, including the well known arch. 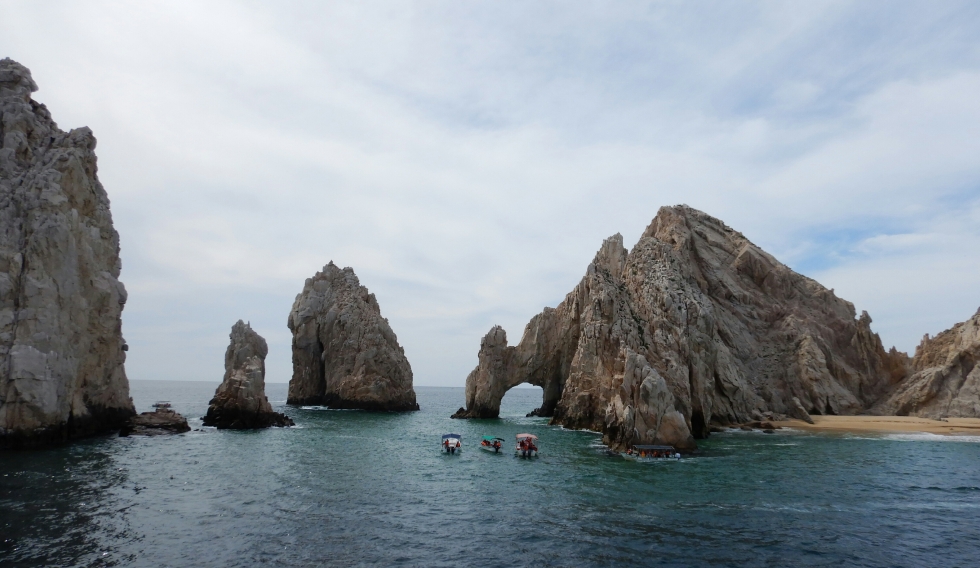 The foreground beach is in the Sea of Cortez, while the farther one is washed by the Pacific Ocean.

Though it’s a catamaran and stable, it does rock and roll a bit, especially when accelerating or turning. About forty minutes after the arch you reach the reef.

Joel gives his somewhat sardonic and funny safely briefing, you strap on the provided fins, mask and snorkel and then ease into the water. Or jump off the stern platform like Mike Nelson if you’re young and fit enough.

I did, and I think I was the oldest tourist on the tour. Because I am strong like bull but also smart like tractor.

Because some tourists sued a tour company a few years back, divers are required to don a flotation device and keep it on the whole dive.

This was a bit of a bummer as I could not actually dive more than a 1/2 meter down.

OTOH, the water was a bit chillier than I expected-though not cold-and the vest kept me comfortable.

It also allowed me to easily float to take surface pictures of the boat and Joel and my shipmates. 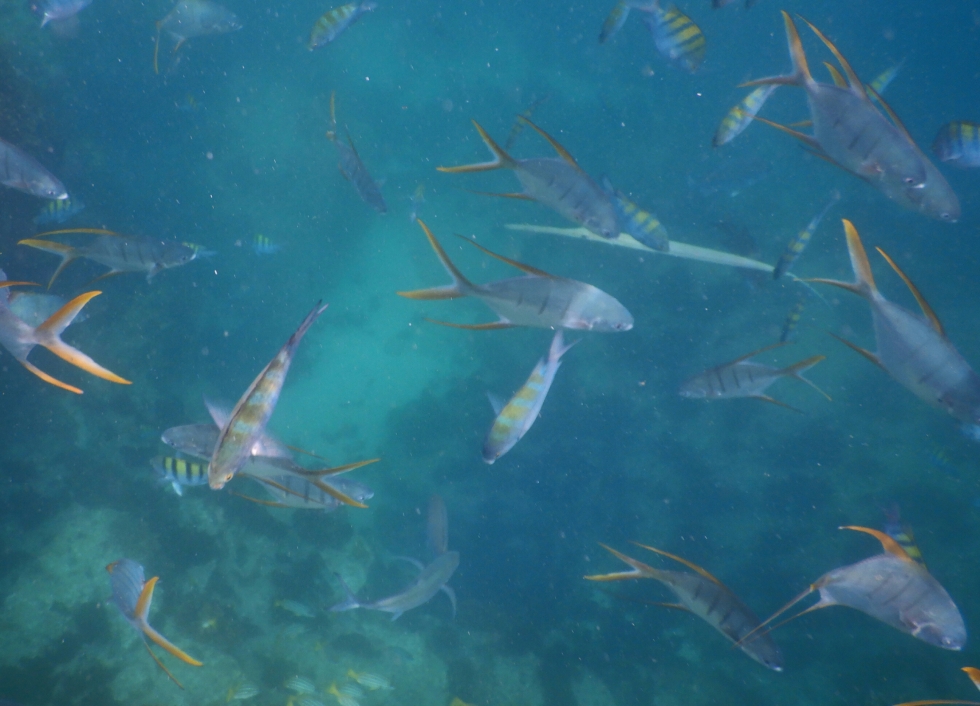 Before we even got in Joel was feeding the fish with bags of chum and there was a frenzied, though polite, feeding.

It was cloudy and maybe 72 degrees so pics were not the best but visibility was pretty good. You could clearly see all the way to the bottom.

I was at a loss as to where to point the Nikon there were so many and such variety of fish.

Though our tour was very small, maybe a dozen, I kept hitting or finning fellow tourists or performing evasive maneuvers to avoid it.

After maybe fifteen or twenty minutes my right leg with the new hip joint began feeling crampish so I egressed the Sea of Cortez (aka Gulf of California), about the last of the Q-tips to quit.

The trip includes kayak and paddle boarding so I tried a bright yellow kayak. I knew I wouldn’t be able to paddle board for more than five seconds. It was fun too.

Back on the boat was the included buffet of tacos, rice & frijoles, chicken, fruit…and all the booze you need too. 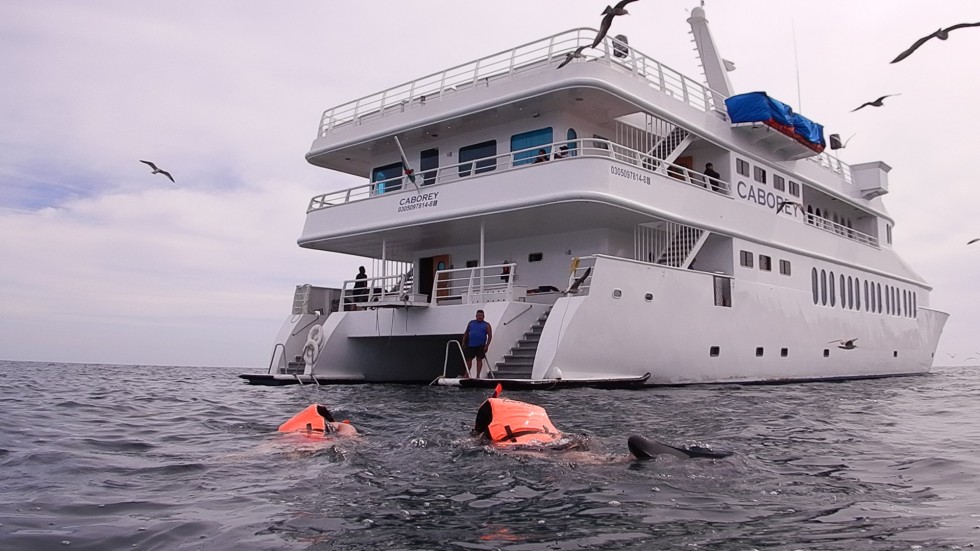 On the way back to the marina a whale shot out the water and back a few times in the middle distance. Pretty thrilling.

Near the dock the head waiter comes around with comment sheets and tip box, $10 highly suggested. Workers here, as everywhere, depend on tips to live so I gladly stuffed in 200 pesos.

Caborey catamaran snorkel dive tour. Highly recommended by me, Memo, my Mexican name. When in Cabo go do it. Tell them Memo sent you.

Unless noted, all pictures and text by todgermanica.com. Non-political, non-religious, non-commercial, non-idiological use is granted for pics and text with attribution.

2 thoughts on “Swimming With the Fishes in Cabo”