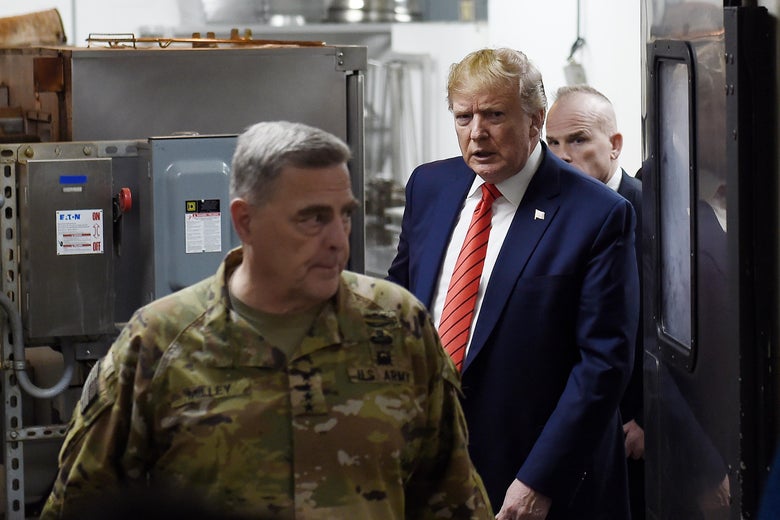 Though most reputable polls show impeached president* trump losing badly to Joe Biden, his base holds at around 39%.

But his bungles and his stupidity are starting cracks in trump’s wholly-owned Republican Party.

Starting with his top general, Mark Milley, walking back his tear-gas-bishop photo-op, if that is even possible:

“I should not have been there,” Milley, the chairman of the Joint Chiefs of Staff, said in a prerecorded commencement address to National Defense University. “My presence in that moment and in that environment created a perception of the military involved in domestic politics.”

Good first step, general. Now would be the time to resign to back up your brave words. You can apologize but you erred. You would fire a captain or major for the same offense.

Even some golfers are trolling trump. One businessman/golfer lured the president* into inviting him to golf with his excellency. Which was not difficult and maybe even coincidental

A perhaps satirical twitter comment by the golfer/inventor/businessman Liam Bennett, inventor of novel snacks, liked trump in a movie that trump once had a cameo in.

Can you imagine the joy that trumpite staffer must have felt, “finally, some good news we can show the boss!”.

Bet he’s on the curb calling Lyft after being escorted from the building with cardboard box of office stuff.

Turns out the inventor of the sausage/doughnut wasn’t a fan of trump at all. This via the London Economic and Crooks & liers blog:

“Liam Bennett, who claims to be the inventor of a doughnut/sausage hybrid called the dausage, responded to a tweet by Today’s Golfer saying the US President would be the person he’d most like to play a round of golf with, adding that he was “amazing in Home Alone II”.
Minutes later he got a surprise follow back from Trump and a DM that read:

“Hi Liam, I saw you wanted to play golf with me. Next time I’m in England I’ll take you and your family to my Trump International course in Scotland. It’s the BEST course in the WORLD”.

‘But the response seemed to come as somewhat of a surprise. Bennett replied:

“Wow, thanks for messaging me, but I think you’re a despicable human being, and even if I could play golf I wouldn’t want to play you. How about resigning?”

Then trump blocked him on twitter.
“Wow, that was a wild few minutes where the actual President of the USA was following me on Twitter and even sent me a message. Shame it ended so badly” 😭pic.twitter.com/KejDKTleNu
— Liam Bennett (@ljkbennett) June 11, 2020

I love how Bennett gets free advertising from trump via Twitter the way trump himself gets eyeballs and money from Twitter. Clever. I daresay I’d try a ‘dausage’.

I’m not saying impeached president* trump will lose in November. We can only vote and hope. But it is not good for his chances to lose the generals and the golfers.