I bought my Silvertone electric guitar new Ernie ball Regular Slinky 10 strings at Dimple Records in Roseville for around $7, and bought a capo for about the same. Some day I’ll learn what that’s for.

After scads of web DIY videos I caved and had The Strum Shop’s tech install them for $10. He let me watch and take blurry pics so I share them here.

He first flipped the strat clone, threaded all the strings up through holes in the body, then reversed it and tightened the machine heads with socket ratchet. 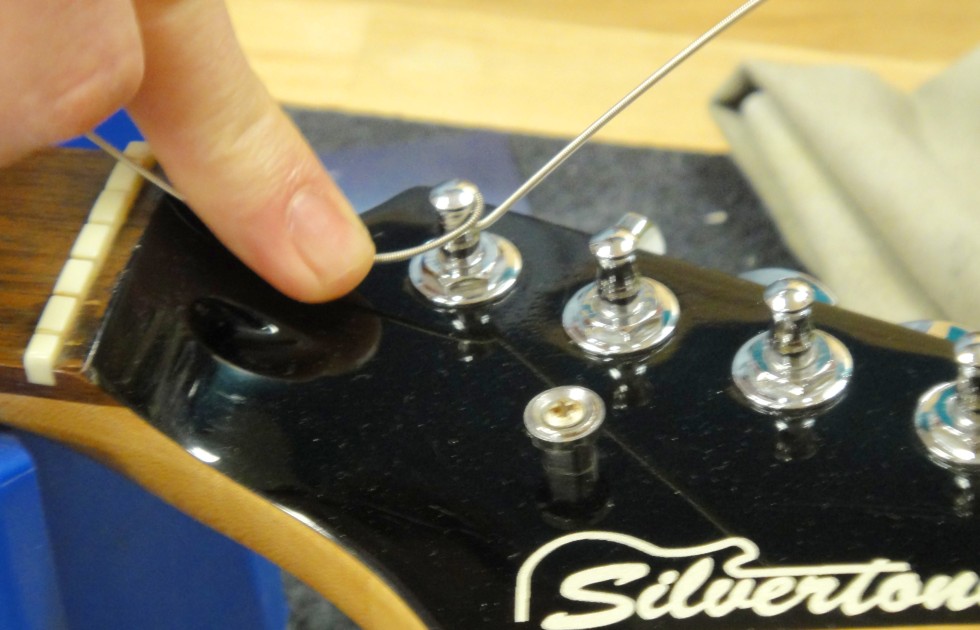 Next he held a few inches of slack while holding tension on the low E string and threaded it through the peg. He measured 2-knuckles worth of string from the hole and clipped the string.

Then he rotated the knob to take up slack, holding the ‘bitter’ string end up so it gets trapped by the string rolling on to the peg from top to bottom.

The string clipper is also a crank knob so he’s very quick at measuring, cutting, winding, tuning and cutting loose ends. Below he tunes the A string using a D’addario digital tuner just like the one they sold me. When tuned, the string excess is cut short. This all goes quickly.

The Web gave the Silvertone mixed reviews. Some said the frets were sharp but most liked the pick-ups. They all said it was a cheap item and your results may vary as to action height and intonation. I worried it would sound sour or get out of tune with the-now removed- ‘whammy bar’. 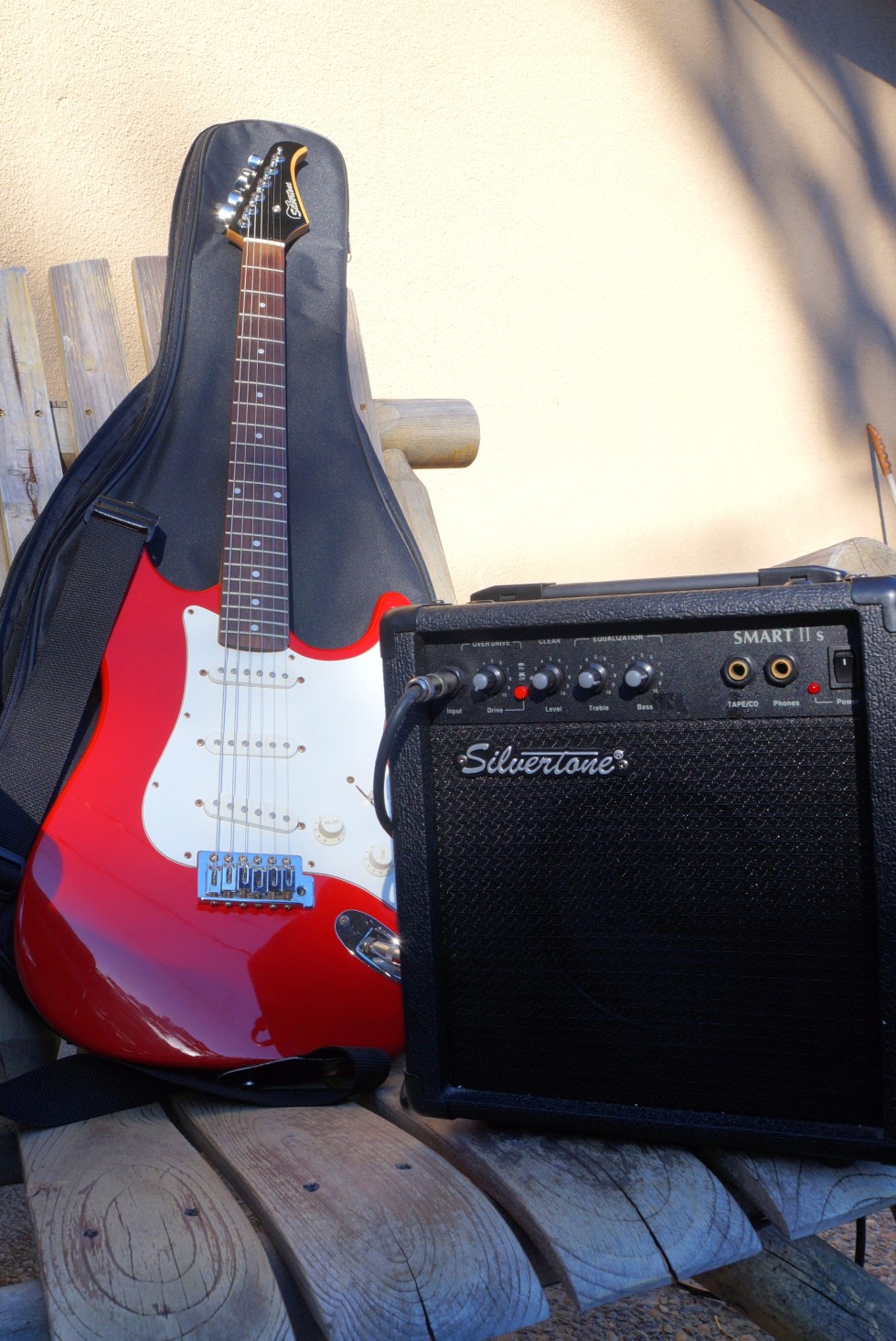 But the tech said the frets felt fine to him and it sounded pretty good, at least when he played it. The action was nice and low, easier to play than the nylon acoustic I’d been learning on; and it stays in tune for a long time with me banging on it like a chimpanzee.

He checked the intonation, which is a function of string length, and it stayed closely in tune played up the neck and the neck bow was right. 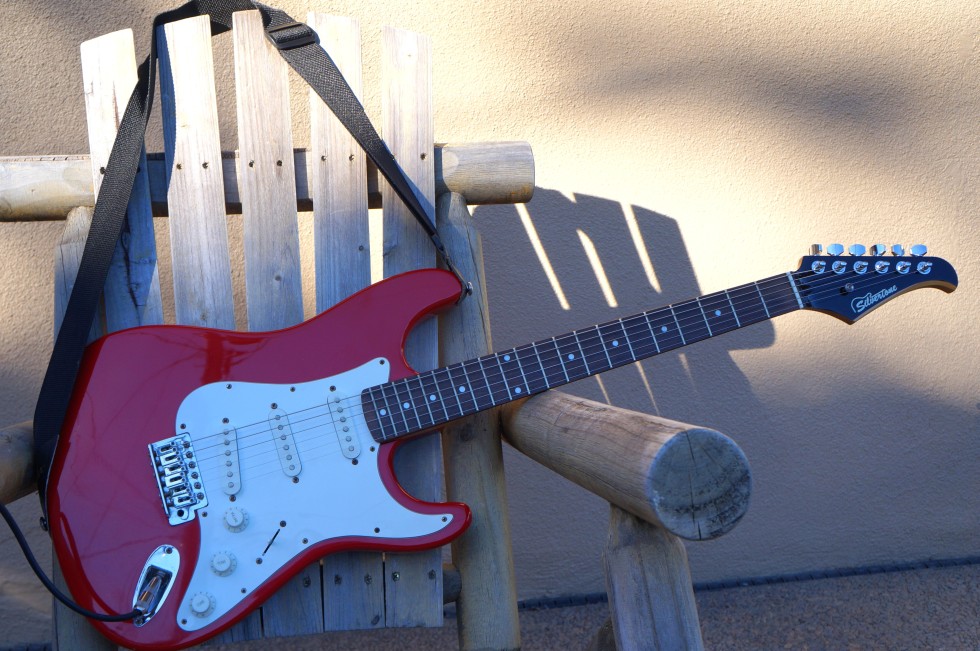 The Silvertone Smart IIS amp, $18 at a pawn shop, sounds good too, putting out all the power I’ll need until I play the Cow Palace. 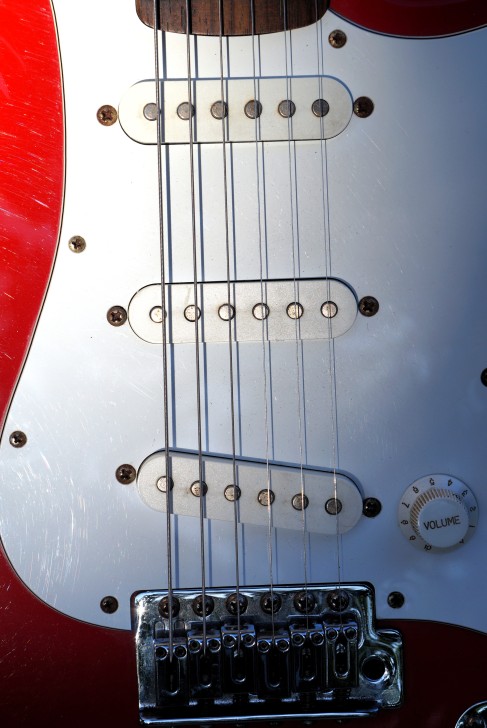 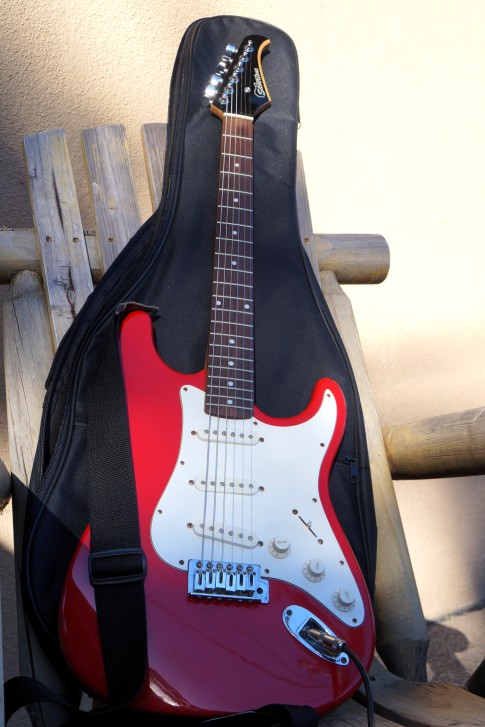 It has a nice clean sound until you push the red Overdrive button. Then it sound raspy and sustained, how much distortion being controlled with a 1-10 rotary knob.

With ax, amp, soft thin ‘gig bag’ (Strum Shop brand, $30), tuner, new strings and capo, the kit is about complete, lacking only a guitar stand and a 21st century instrument cable. I have less than $130 USD in it so far. With this setup I can be a guitar hero, if I can learn more than 2.75 chords.

2 thoughts on “Guitar Kit Completed: Silvertone Gets Strung Up”